Officers confiscate at least four dogs after the animals killed a man in a Selma neighborhood.

Bulldog Kennel Identified
UPDATE 08/01/22: The breeder of these mongrel English bulldogs has been located. It's "painfully" clear that Selma police are standing outside of the same residence that dominates the "Four Brothers Bulldog Kennel" Instagram and TikTok pages. Owner claims his dogs are AKC registered English bulldogs. Victor Carranza also claims he is "preserving the true essence, structure and temperament of the English bulldog," which apparently, includes killing people. 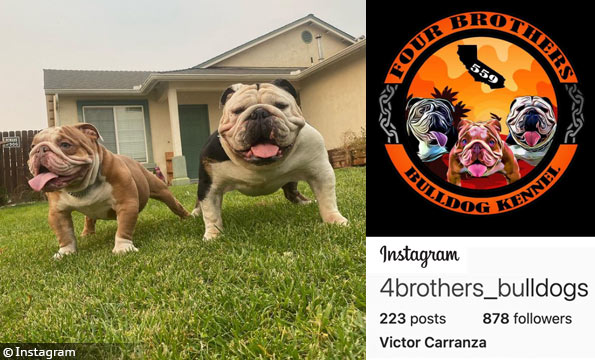 Four Brothers Bulldog Kennel is located at the same residence where the dogs were seized.

07/31/22: Selma Police Media Release
Selma, CA - A 59-year old man died Sunday after being mauled by dogs. Selma police officers were dispatched to the 3000 block of Goldridge Street at about 1:00 pm Sunday on reports of a man being attacked by several dogs. When officers arrived, one person was trying to separate the dogs from the victim. Offers rendered first aid until paramedics arrived. The man was transported to a hospital, where he died of his injuries, states a release from the Selma Police Department.

At least four dogs -- all of the same bull breed-mix -- were confiscated. During the course of the investigation, it was discovered the dogs escaped from a nearby residence and attacked the victim as he walked through the residential neighborhood. The person who came to the victim's aid was also bitten by one of the dogs, but the injury was minor. Detectives are actively investigating the case. "The owner of the dogs is cooperating with investigators," states the media release.

Back in 2012, 30-year old Remedios Romero-Solares was killed by a pack of similar dogs in San Diego County. The owner of those dogs was breeding the animals for sale. Those particular bulldogges were crossed with American bulldogs to increase their size. The shorter Selma dogs show an intense thickness (aka "bulliness"), which is an essential characteristic of the American bully, which comes in four sizes, including the pocket bully (smallest) and XL bully (largest).

KFSN reports that a cross and a candle have been set up at the site of the deadly dog attack on Goldridge Street near Balboa. "In Memory of Hutch," is written on the wooden cross. Police have not released the victim's identity. No information has been released about the dogs' owner, except that the individual is "cooperating with investigators." It is unknown if the dogs have a history of getting loose or behaving aggressively. It is unknown if criminal charges are being considered.

Late Monday, we located a GoFundMe for the victim, identified by family as Richard "Hutch" Barry.

Two bull breed-mix dogs being confiscated after killing a man in a Selma neighborhood. Two bull breed-mix dogs being confiscated after killing a man in a Selma neighborhood. 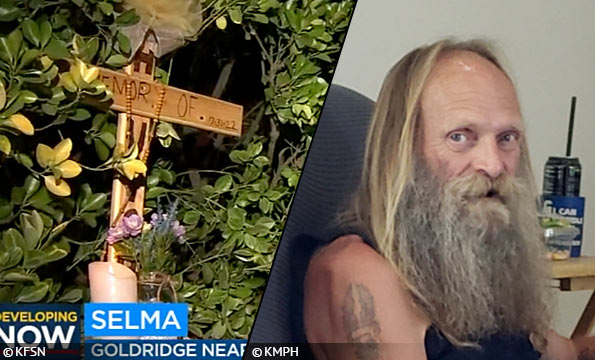 A memorial cross for the victim, Richard "Hutch" Barry, was place where the attack occurred.