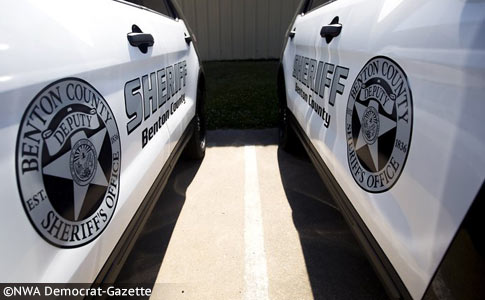 Patti Webb, 65, was killed in a dog attack in September at her home near Avoca.

Suspected Attackers
UPDATE 11/12/21: Yesterday, we began examining the local rescuers and transports that began trying to find homes for the animals that were left on the property belonging to Patti Webb. She was discovered dead on her property on September 24 after being attacked by one or more dogs. The Benton County Sheriff's Office believe Webb was breaking up a fight between two dogs when at least one of them attacked her. There were at least 17 dogs on her property, authorities said.

We know that by October 6, rescuer Ken Garner was trying to find homes for four of Webb's dogs. We also know that by October 16, "more than a dozen" of Webb's dogs were sent to the "Ozark Freedom Drivers" for transport to Illinois. That equates to about 17 dogs. These facts conflict what the sheriff's office told the NWA Democrat-Gazette on November 11. That "the dogs will remain in quarantine until reports are back from the laboratory" regarding the results of the DNA tests.

We also know that two dogs belonging to a neighbor may have also been involved in the attack, according to Captain Thomas See. Presumably, their DNA is also being tested. Those two dogs, which are still in the owner's custody, are being home-quarantined. An October 31 post by Garner, sheds more light on the neighbor, who is actually a renter on Webb's property. Both dogs are pit bulls. The dogs "knew her," Garner states, and she had taken both pit bulls to get neutered.

Garner does not believe Webb's dogs were involved in the attack. "I'm sure [it] wasn't Patti's dogs," Garner wrote. "Her renters had pits. But she took the pits and had [them] neutered. They knew her. But maybe trying to break up a fight. Don't know. Upsetting," he wrote. Given that all, or nearly all,1 of Webb's dogs have been rehomed already, it doesn't make sense from a police perspective that her dogs were involved either. The only suspects are two neutered pit bulls. 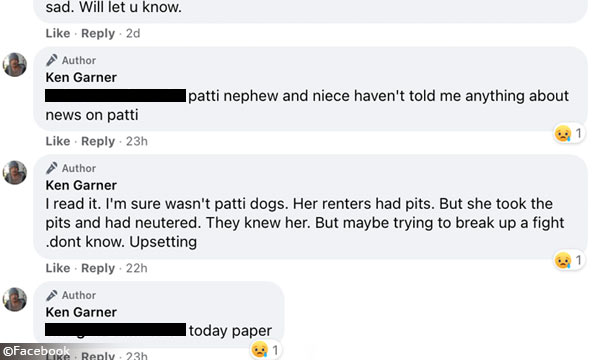 Garner states Webb's renters had pit bulls and that Webb had gotten both dogs neutered.

11/11/21: Avoca Woman Killed by Dogs
Benton County, AR - Patti Webb, 65-years old, was discovered dead at her home on September 24, according to Captain Thomas See, who leads the criminal investigation division for the Benton County Sheriff's Office. Detectives believe Webb was breaking up a fight between two dogs when at least one of the dogs attacked her. 17 dogs were removed from Webb's home near Avoca, See said. Two dogs belonging to a neighbor might have also been involved in the attack, See said.

The dogs seized from Webb's home were taken to the Humane Society for Animals in Rogers. See said her dogs needed to be held in quarantine due to the mauling. However, social media posts indicate that over a dozen of these dogs were sent to the "Ozark Freedom Drivers" for transport to Illinois on October 16. The two dogs belonging to the neighbor are still in the owner's custody. But the owner understands the dogs must be home-quarantined, according to See.

DNA samples were taken from each of the dogs and sent to the Arkansas Crime Laboratory, reports the NWA Democrat-Gazette. See said the dogs will remain in quarantine until reports are back from the lab to see if it can be determined which dog or dogs were involved in the attack. See made no mention of the over one dozen dogs belonging to Webb that have already been transported out of state. Webb fostered animals and took in stray dogs, according to authorities.

The Benton County Sheriff's Office did not issue a press release after her death in September and did not release the breeds of dogs that belonged to Webb or her neighbor. See did confirm that the medical examiner determined Webb's death was due to being mauled to death by dogs. Online voter registration websites show that Webb lived in the 12000 block of Cavewood Road near Avoca. Her closest neighbor owns at least one female pit bull, according to his Facebook page.

What the "quarantined dogs" disconnect by See could indicate is that it became clear early on that over a dozen of Webb's dogs were not suspects and were cut loose by the sheriff's office -- freed for transport -- in October. Thus, leaving the neighbor's two dogs as the primary suspects and possibly one or only a few dogs owned by Webb. DNA lab results could take months to be returned, and there is no guarantee that there will be any follow up by news outlets at that time.

"Cut loose" may be the wrong choice of wording as well. A Facebook friend of Webb, Ken Garner, who tried to rehome Webb's pets stated on October 6, "We are trying to place animals that are left at Pattie Webb place in Avoca," indicating that some animals were never even seized, at least not by that date. Webb had a number of different kinds of animals, including adult dogs -- at least one was a great pyranees -- pyranees puppies, several overweight pot bellie pigs and a donkey. 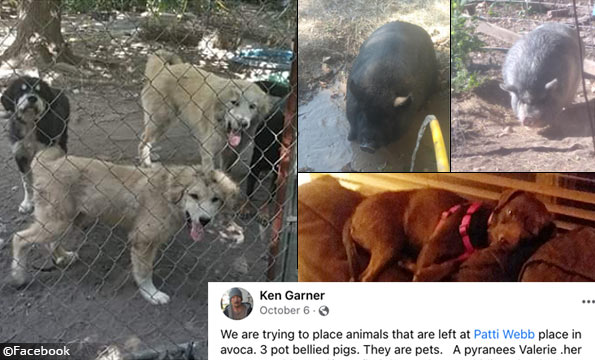 Rescuer Ken Garner scurried to find homes for Webb's animals left outside on her property. 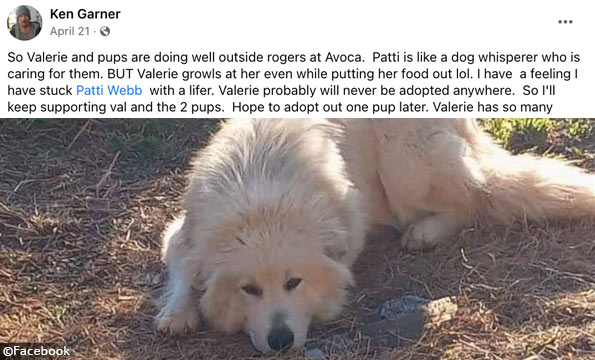 The great pyranees, named "Valerie," did have aggression issues. Comments about her puppies from Garner include, "They are big pyranees pups. So shy. Only patti could pet them."

1We are trying to determine where Valerie and her two offspring are currently being held.