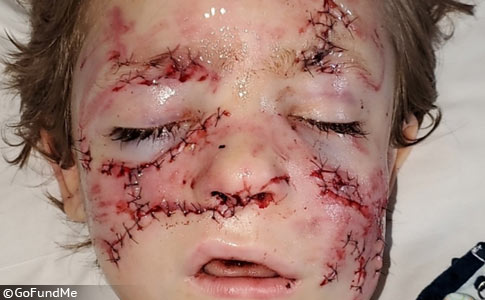 Camdon Bozell suffered multiple fractures after being attacked by a relative's pit bull.

Severe Facial Attack
Plainwell, MI - Late Monday, we learned that a 6-year old boy was attacked in the face by a relative's pit bull on Saturday. Camdon Bozell suffered a broken nose, fractured skull and many facial injuries. "He underwent emergency surgery and was pieced back together by a plastic surgeon and taken to ICU for recovery," states Becky Rose, the organizer of his fundraiser. The attack occurred at his paternal grandmother's home, while his mother, Tristin Lent, was at work.

In what we can only term as "bizarre," Lent spoke to Fox 17 about her son's attack, but spent nearly an equal amount of time "defending the breed." Lent was surprised the pit bull "went for his face" in "literally a second." The attack was "totally unprovoked," she said. "This dog has no history of aggression. He's used to being around loud, rambunctious kids," she said. Unknowingly, Lent just ticked off the well-identified risks of why pit bulls are dangerous, especially to children.

Next, Lent defended the breed. "I love pit bulls too and always have," she said. Then she displayed shame and a willingness to suppress breed information. "Now when people are asking 'what breed' he was, and I just don't want to answer them," she said. "Because I know that once I say, 'it's a pit bull'…" Again, this is after Lent stated the reasons why pit bulls are dangerous: an unprovoked violent attack to the face and the pit bull, allegedly, had no history of aggression.

"The data showed that compared with other dog breeds, pit bull terriers inflicted more complex wounds, were often unprovoked, and went off property to attack ... The probability of a bite resulting in a complex wound was 4.4 times higher for pit bulls compared with the other top-biting breeds ... and the odds of an off-property attack by a pit bull was 2.7 times greater than that for all other breeds."1

Though we have not yet done a post devoted to the above West Virginia study (we only show highlights), it has relevant findings given Lent's reaction. The study is the first to define a "mauling event." Mauling injuries were recorded "when 3 or more bites occurred over 2 or more distinct regional anatomic areas, typically the craniofacial region, back, torso, and extremities." Pit bulls were responsible for the most, 12, and 67% (8) of these attacks were inflicted on family members.

The study also examined scienter status, which was "directed at all owners and some relatives whose dog inhabited the domicile in which the attack took place." This status was "recorded as positive if there was knowledge of aggressive behavior of the dog (dogfighting, growling, or posture indicating threat of chasing or biting) or the dog had attacked or bitten a person before the current injury," states the study. Pit bull owners, however, could not be trusted to be honest.

Pit bull owners admitted to a positive scienter status in 14 of the 49 recorded bites. However, knowledge of previous aggression could not be determined for a high number of pit bulls because of the non-family status of the dog or because the owners or family members were ambiguous as to their dog's behavior history or "would not admit such knowledge." One adult who sustained mauling injuries refused to identify the breed of her dog, thus it remained "unknown" in the study.

For the remainder of this post, it is presumed this mauling event was carried out by the female victim's own pit bull, not an "unknown" breed.

Lent is now in the position of doing the same thing. "Now when people are asking 'what breed' he was, and I just don't want to answer them," she said. No doubt due to the person's predictable response. "That is what pit bulls are known for." They will attack without provocation; without a history of aggression (known or otherwise); will inflict complex wounds, and in this case, multiple facial and skull fractures. This was a "mauling event," not a "dog bite" as the fundraiser claims.

Further, of the 9 unreported fatal dog maulings we have uncovered through public records requests, 89% (8) involved pit bulls and 78% (7) involved family pit bulls killing a household member. Thus, the most common scenario of an unreported fatal dog mauling involves a family pit bull. This may be due to the same shame demonstrated by Lent. Pit bull owners and their family members will undermine statistics by suppressing information after a fatal pit bull mauling.

In addition to the GoFundMe, the organizer published a disturbing video of the boy in distress. The video, in our eyes, was strictly for fundraising purposes. In the background, one hears the mother attempting to console her son. The creepy fundraising video appears to be exploitive, but perhaps was a necessary evil in the fundraiser's mind to garner more donations. By Wednesday afternoon, the fund for Camdon had reached over $36,000 with the initial goal of reaching only $2,000.

Owner of the Dog

Camdon was visiting his paternal grandmother's home when the attack occurred, but this does not inform readers who owns the dog. The dog could belong to the grandmother or family members who lived at her home or were visiting. The fundraiser only indicates the owner is male. The "ambiguousness" of who owns the pit bull is deliberate by family members, just as pit bull owners or family members were ambiguous about their dog's history of aggression in the medical study.

Alarmingly, the Fox 17 article insinuates the dog is being hidden by the owner as well. "Kalamazoo County Animal Control is investigating the case, but would not comment further," states the article. "The exact whereabouts and future for the dog are unknown at this time," states the article. That was reported Monday evening and the attack occurred on Saturday. Given this outrageous ambiguity, we imagine there is a good chance Camdon is also undergoing rabies vaccination.

That would be one more checkbox from the West Virginia medical study. No provocation, no scienter status, no vaccination, simple wounds: yes, complex wounds: yes, multiple fractures: yes (facial and skull), and in this case, the attack was on property. Among vaccination status in the study, it states: "Most dogs were vaccinated. A disturbing trend was noted, however, among pit bulls: 37% were not vaccinated or could not be confirmed as vaccinated, which was significant." 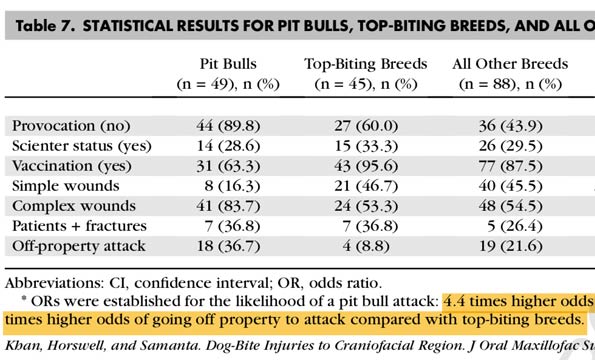 The stigma of being a defender of the breed, as Lent displayed, or owning a pit bull, as the female in the study displayed by refusing to name her dog breed after it attacked her, most often comes to light after an unprovoked attack by a family pit bull. There is shame because the public has known for many years that pit bulls are a well-identified risk for inflicting severe injury. When an innocent child is the victim, the shame experienced by the owner or their family members is likely worse.

We have also seen denial by family members after a family pit bull has killed a household member: "The family does not blame the breed."2

On the Fox 17 Facebook post, commenter Sierra Moore-Day claimed to "know this particular situation" and stated what other commenters said. The "boy's uncle lives with the grandma and is the owner of the dog."3 Moore-Day defended Lent, calling her a "great mother" and that "it sucks that her interview with the news comes off as that she is still a supporter of the breed." Moore-Day also stated that Lent asked the owner of the dog to put it down and the male owner refused.

Though this information is unconfirmed, Moore-Day is believable. She is also correct that Lent had no control over how Fox 17 edited her interview. Media often picks the most controversial (or emotional) aspects of an interview to create drama or to incite controversy. However, Lent did say what she said. Those words were then juxtaposed against her son's injuries after being mauled by a relative's pit bull that was "used to being around loud, rambunctious kids," according to Lent.

Pit bull supporters, owners and their family members will suppress breed information, either to lower their feelings of shame or to "protect the breed" after a serious or fatal mauling. The West Virginia study documented that an owner will even do this in a trauma center after being severely attacked by her own dog. When the denial of well-identified risks is confronted by an actual outcome, an unprovoked facial attack resulting in severe injury, humiliation sometimes follows.

Operating on the theory that Moore-Day's information is valid does not remove what Lent said on camera, but it does offer context. Lent did not own the dog, has asked the owner to put it down, and the owner, allegedly the child's uncle, has refused. The child's uncle is the despicable party. Lent said, "I love pit bulls too and always have" at a disastrous time. She also expressed shame and a willingness to suppress breed information when she did not even own the pit bull!

Camdon Bozell needs all of the help that he can get. His road to recovery will be long and insurance only covers reconstructive surgeries, not cosmetic. The GoFundMe states that he may have "possible nerve damage to the left side of his face" too. Throughout his recovery, there will be too many doctor visits to count. As his face and skull grows, he will likely undergo future plastic surgery. This tragedy could have been prevented if the uncle had owned a beagle instead. 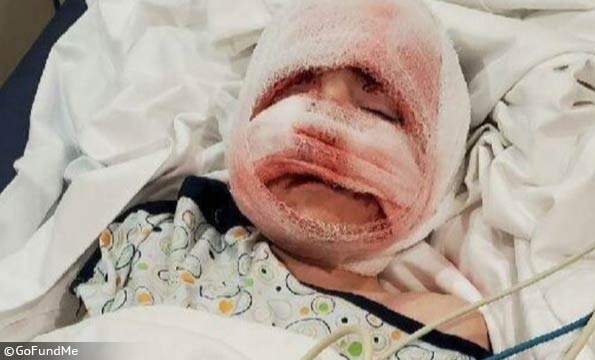 Camdon Bozell seen in hospital bed after being attacked in the face by a relative's pit bull. 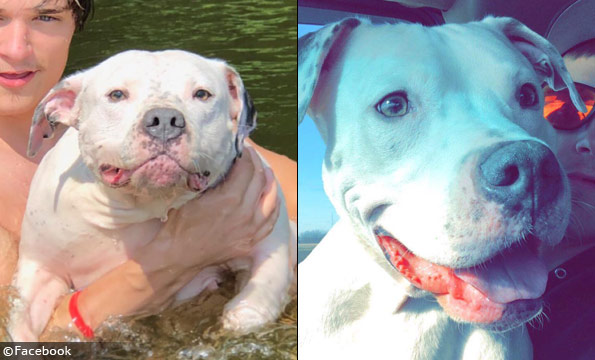 In August, it was confirmed that the male pit bull that attacked Camdon was named "Chaos."

You can make a donation to Camdon Bozell's "Mauling Event" medical fund at GoFundMe.
1Dog-Bite Injuries to the Craniofacial Region: An Epidemiologic and Pattern-of-Injury Review at a Level 1 Trauma Center by by Khan K, Horswell B and Samanta D, MS J Oral Maxillofac Surg, March 2020 [2019 Nov 14, Epub].
2The brother of the victim's full statement after Connie Holley was brutally attacked by her son's pit bull: "The family does not blame the breed. I am her brother. I love pits have only met a couple that have been bad. I personally think the dog a rabies. This dog did not attack like a normal dog. It attracted her drug her into the bushes, brutally ripping her thighs down to the bone. He bit her on the neck and behind her head, he them continued to rip and chew on her for the next 4 hours. It was a horrible tragedy. But I don't blame the breed. So that I squared up maybe you can do something constructive and tell people to vaccinate their pets." [sic]
3 The male pit bull could be "Chaos." We hope we are wrong about this.

25 thoughts on “After Severe Facial Attack by a Relative's Pit Bull, Shame Follows and a Willingness to Suppress Breed Information”