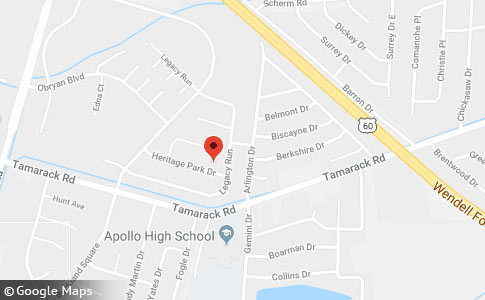 Location of family pit bull attack that left a man dead and a woman seriously injured.

Pit Bull Confirmed
UPDATE 02/17/18: On Thursday evening, Owensboro Police and Owensboro Fire responded to a home in the 2300 block of Heritage Park Drive at about 6 pm after reports of a dog attack. When police entered the home, they shot and killed a large aggressive dog and tasered a beagle. Police found David and Dana Brown on the ground with injuries after trying to break up a fight between two family dogs. It has now been confirmed that the larger aggressive dog was a family pit bull.

In a Messenger-Inquirer article, which is behind a paywall, Daviess County Animal Control Director Ashley Clark described the large dog as a pit bull. This confirms what multiple people close to the case have been stating on social media in the aftermath of Thursday's attack. David G. Brown, 46, was pronounced dead at Owensboro Health Regional Hospital after the attack. As of Friday, his wife Dana Brown, 45, was also hospitalized at the same location and listed in fair condition.

Officer Andrew Bell, public information for the Owensboro Police Department, told the Messenger-Inquirer that Dana told officers the incident began after the family pit bull and beagle got into a fight. When Dana tried to break up the fight, she was attacked, Bell said. When David came to help, he was also attacked. "He jumped in, and they turned on him," Bell said. Daviess County Coroner Jeff Jones said the attack was a factor in Brown's death; he also had heart issues.

Clark provided additional details about the couple's dogs, noting that they were all fixed and well cared for. "The dogs were well-taken care of," Clark said. "They were clean and fixed. You could tell they were beloved pets of the family." The pit bull "was probably 90 pounds," Clark said. The family's third household dog, a dachshund, was also attacked by the pit bull during the fight. The surviving dogs were removed from the home and will be placed with family members, Clark said.

02/16/18: Man Dies After Dog Attack
Owensboro, KY - A man is dead and a woman was injured after being attacked by a dog, according to information provided by the Owensboro Police Department. The attack occurred around 6:00 pm in the 2300 block of Heritage Park Drive in the Heritage Park neighborhood in Owensboro. At least three dogs resided at the home, but apparently only two were involved in the attack. A responding officer shot and killed one of the dogs after it tried to attack the officer.

A few minutes later, the dispatcher states, "Male subject was attacked by two dogs and went inside his residence. Caller is advising someone is possibly giving him CPR at this time. Just use caution as the two dogs are still in the front yard." A variety of unverified Facebook comments from people close to the case indicate the surviving female victim went into emergency surgery, the man who died may have also suffered a heart attack and that the culprit was a family pit bull.

Continuing on the 14 News comment thread we were viewing last night, more people directly involved in the case spoke out Friday morning. Casey Cecil, who would not "say the breed," said her son was there and that police shot the dog when it chased her son into a car. "My son was there and was the one that called the cops for help." Melody McKinney said her daughter was there too, "She too can't get the screams out of her head." McKinney stated the dog was a pit bull.

Both Cecil and McKinney agreed, "If any one of our kids tried to intervene more than they did, we would be planning their funerals today." McKinney added, "They [the kids] also kept the wife from being attacked and some neighbors who had pulled up and got out of their car. The kids were screaming, 'Get back in your car' because the dog was headed their direction. They saved several lives last night. Including their own!" We are still waiting on confirmation from Owensboro police.

14 News released an update Friday afternoon confirming some of the Facebook comments. Responding officers arrived to a scene of two aggressive dogs; they shot and killed one of them due to its aggression. When officers entered into the Heritage Park home, they found an injured man and woman lying on the floor. Both suffered injuries while trying to break up a fight between their family dogs. Police have identified the couple as David Brown, 46, and Dana Brown, 45.

David Brown did not survive his injuries. The Daviess County Coroner’s report states that he suffered a cardiac arrest that was complicated by the dog attack. Last night people close to the case said that Dana underwent emergency surgery. Comments from this morning indicate that four teenagers were near the scene, one even called police for help. Multiple people close to the case have stated the attacking dog is a pit bull. Presumably, the same animal police shot to death. 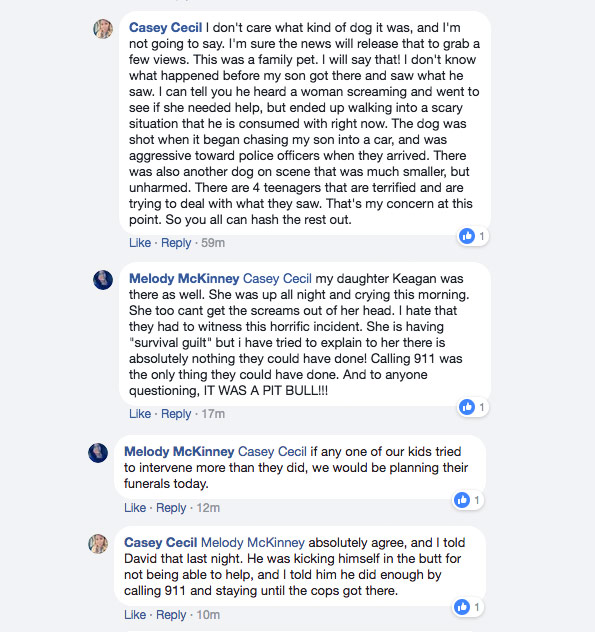 Baseline reporting requirements:
Law enforcement departments across the United States should release consistent "baseline" information to the media and the public after each fatal dog mauling, including these items.
Tweet
Share181
Tweet
Share181
Donate Now