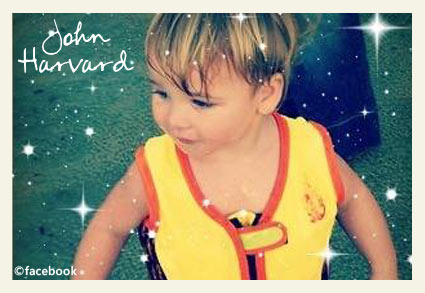 Mother Terrorized at Grave
UPDATE 07/01/14: In a painfully ominous development, the mother of John Harvard, who was brutally attacked and killed by a neighbor's pit bull in April, was recently terrorized by a pit bull while visiting her son's grave. This is the second time this has occurred and the last time with this pit bull. After the dog charged at her on Sunday while visiting her son's grave, Johnna Harvard scrambled into her car and called 911. A Pell City Police officer responded and shot the dog dead.

Harvard captured the incident on video. "She had to shoot it. When that happened yesterday, I was shocked the dog was still there. It charged; it was not going to stop."

After losing a son to a dog attack and almost becoming a victim, Harvard says there needs to be stronger leash laws and regulations, especially where pit bulls are concerned.

"We need to do something on a state level because that was the closest I've ever felt to death and I had that fear of being chased by an animal. I felt like I felt what my son felt and no one should feel that way." - ABC 33/40

Johnna correctly states, "These dogs are everywhere." This includes cemeteries. In the raw video, Johnna weeps -- she cannot believe this is happening as she kneels beside her son's grave, still covered in beautiful flowers. The loud gunshot by the Pell City Police officer followed by her tears serves as a reminder of how real the pit bull problem is and why it no longer can be ignored. To read Johnna's full account of the attack that took her son's life, please visit Daxton's Friends.

06/18/14: Pit Bull Owner Indicted
A St. Clair County grand jury indicted the owner of a pit bull on a charge of criminally negligent homicide, a misdemeanor, in connection to the death of 5-year old John Harvard. On June 17, Johnny Ray Kay Sr., 57, of Riverside, turned himself in following his indictment. "Evidence obtained by the St. Clair County Sheriff’s Department into the death investigation of John Harvard was presented to a grand jury last week," St. Clair County District Attorney Richard Minor said.

Minor said that if Kay is convicted of criminally negligent homicide, he could face up to one year in jail and a $6,000 fine. Kay is scheduled to be in court for his arraignment on August 13. Both Kay and the victim's father, Jeremy Harvard, declined comment on Wednesday. Last month, however, Harvard said that he had never seen the dog until after it attacked his son. He said his children had never played with the dog either -- disputing several media reports that followed the attack.1

Harvard said he last saw his son alive next to the front porch. He had his bicycle upside down and was putting a chain on it. Harvard said he went inside to change his clothes. About 5-minutes later, his older son came into the bedroom yelling, "A dog is on John!" Harvard grabbed his pistol and ran out of the house. He first yelled at the dog then shot at the animal several times in order to retrieve his son. Harvard rushed his younger son to the hospital, but he did not survive his injuries.

04/11/14: Parents Interviewed
In an emotional interview that aired at 5 pm CST on ABC 33/40, the parents of a little boy mauled to death by a neighbor's pit bull spoke out publicly for the first time about their horror and loss. Jeremy Harvard, the little boy's father, told ABC 33/40, "It's sad because I read a story on Facebook the other day about a 5-year old being mauled by a pit bull," said Harvard. "And I never dreamed I'd be talking about that to you today, because it happened to us. It happened to John."

Readers should know that there will likely come a day when a great majority of Americans will know a person or pet who has been mauled by a pit bull. This sentiment was also recently echoed by a Winston-Salem Journal columnist after 3-year old Braelynn Coulter was killed by her family's pet pit bull: "Anecdotally, many of us know that pit bulls are trouble. Increasingly, more of us know someone who’s been attacked by a pit bull, or whose dog has been attacked," John Railey states.

Donations can be made to the John Triton Harvard Memorial Fund at YouCaring.com. 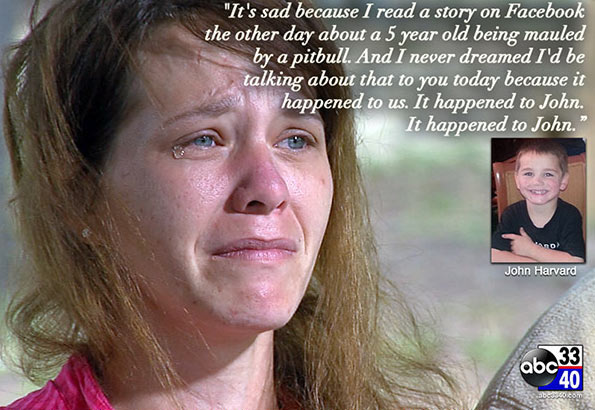 04/10/14: Pit Bull Euthanized
New information has been released about the mauling death of 5-year old John Harvard who was brutally attacked and killed by a neighbor's pit bull on April 6. The pit bull was reportedly only 8-months old, according to the Daily Mail, and has since been euthanized. The City of Riverside does not have a leash law. However, St. Clair Undersheriff Billy Murray said that law enforcement would still likely consult with the St. Clair County District Attorney's Office about the evidence.

Because the dog was technically "at large" when it attacked the boy (and also lived next door to the boy in a semi-rural area), there has been a flurry of attention on "passing a leash law" to prevent similar future tragedies. Every town has to start somewhere and in semi-rural and rural communities, it usually starts at the base level of a leash law. A balloon release event is being organized for Saturday to help Riverside community members say goodbye to John Harvard.

04/07/14: Burial Fund Started
A family friend or relative has started the John Triton Harvard Burial Fund at fundly.com. "Please help a grieving mother bring her deceased child home with her to California for a burial surrounded by family and siblings," states Jodi who created the page. The boy's mother, who had been staying in California with family, "has begun the 2,300 mile journey to retrieve her precious son's body and bring it home to rest in peace forever near her and his siblings," states the More Info of the fund.

04/06/14: Pit Bull Kills Child
St. Clair County, AL - In a developing story, a 5-year old boy died Sunday after being attacked by a pit bull in Riverside, Mayor Rusty Jessup told ABC 33/40. The victim was playing with his 9-year old brother when the animal attacked him, according to Jessup. He was transported to a local hospital, where he was pronounced dead. Police have identified the 5-year old boy as John Harvard. ABC 33/40 has a crew en route to the scene and will be livestreaming from the scene.

WVTM adds additional details about the attack. Jessup said the attack occurred just after 4:00 pm Sunday. The two brothers were playing in their yard when an 80-pound pit bull came onto their property and attacked the younger boy, Jessup said. The 9-year old tried to get the animal off his brother, but could not. He ran into their house to get help. The father ran back outside and shot at the pit bull. The boy was rushed to St. Vincent's Hospital in St. Clair County, where he died.

View the DogsBite.org Google Map: Alabama Fatal Pit Bull Maulings.
1According to news reports, Mayor Rusty Jessup said the neighbor's dog used to play with the boys. Neighbors told the mayor that they had seen that dog playing with kids in the past too. The criminal trial should shed light on this.