Fatal Dog Attack Statistics
DogsBite.org recorded 32 fatal dog attacks in 2013. Citations of each victim's history are located on the Fatality Citations page. The last year the CDC recorded human deaths by dog breeds was 1998. Likely due to pressures from animal advocacy groups, the CDC discontinued research in this area. Since 1998, pit bulls alone have killed 236 U.S. citizens. The only other known nonprofit organization, in addition to DogsBite.org, that tracks this vital data publicly is Animal People.

Adjacent year fatality data is usually insignificant, but a 9-year high is not when in context with years showing a steady rise. Adjacent year nonfatal attack data, however, can be very significant. The latest report by Merritt Clifton, Dog Attack Deaths and Maimings, U.S. & Canada, September 1982 to December 31, 2013, shows a shocking rise in nonfatal pit bull attacks -- involving serious bodily injury, disfigurements and maimings -- between 2012 and 2013 (See: graphic chart).

In 2013, over one-third, 38% (12) of all dog bite-related fatality victims were either visiting or living temporarily with the dog's owner when the fatal attack occurred, up from 32% in 2012. Children 7-years and younger suffered the brunt of these attacks, 83% (10). A closer look shows that 7 of the 12 deaths involved babysitters, and all 7 deaths were inflicted by pit bulls. In at least 5 deaths, multiple pit bulls were in the babysitter's household too, as if one were not dangerous enough.

In the death of Daniel "Doe," 2-years old, the babysitter was watching 5 children at the time -- all under 10-years old, each with special needs. Lara Czerniski, 28, also had 4 adult pit bulls in her household. In this "loaded" high-risk scenario, it is not unpredictable for a disaster to unfold. The other egregious babysitter case involved Samuel Zamudio, also 2-years old. At the time of the attack, he was being watched by his uncle in a household with 8 pit bull-mixes (5 were adults).

Parents must come to grips with what this data means. It is a high-risk scenario to allow your child to visit the home of a friend or relative with one or more pit bulls. It does not matter if those pit bulls are "good" to the dog owner's own children -- those children are not visiting. All babysitters must be thoroughly questioned by parents regarding 1.) If they have dogs in their household and 2.) If yes, what kind? If the answer is pit bull or other known high-risk dog breed, find a new babysitter. 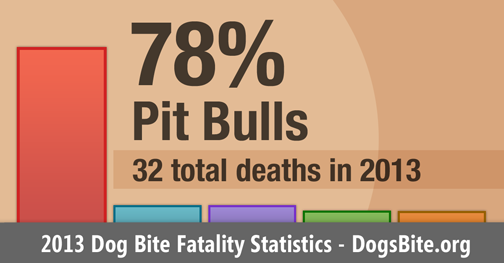