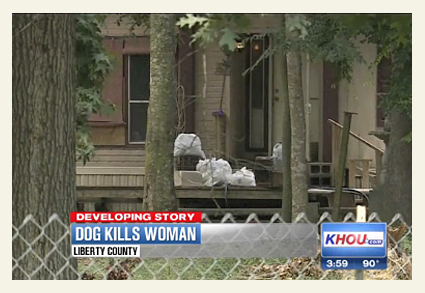 Dog Shot and Killed
UPDATE 07/02/13: The Houston Chronicle reports that the dog that killed a 63-year old woman on Monday was shot to death Tuesday night. Since the attack, the animal has managed to evade deputies who mounted a serious search effort in the Woodland Hills subdivision where the attack occurred. Liberty County Sheriff's Office warned area residents to "NOT approach this dog" and to keep small children and family pets inside their home until the animal was captured.

Upon arriving at the woman's home on the day of the attack, deputies fired three shots at the dog. At least one struck the animal, according to the article, "that left a flesh wound in his neck." Liberty County sheriff's Capt. Ken DeFoor said, "The dog had yelped but had still been able to escape under the fence and flee after he was wounded that first time." It took two more shots by a deputy on Tuesday night to finally bring the animal down. The dog's remains will be tested for rabies.

Information was also provided about the pet dog the animal first attacked prior to turning on its caretaker Linda Oliver. Investigators said her small brown wiener dog suffered deep lacerations on its throat. Oliver had been feeding and caring for the stray dog for about two weeks prior to the attacks. After being severely injured by the dog, Oliver crawled from her front yard into her home and called her husband before passing out. She was dead by the time deputies arrived.

07/01/13: Rottweiler-Mastiff Mix
The KHOU article, along with others in this developing story, report that just after the woman told her husband she was bitten, the phone line went dead. At the time of the call, her husband was at work in Pearland, an hour's drive from his home. This is why he called Liberty County Sherifff's Office and asked that they check on his wife. The husband was still on the phone with the sheriff's office when the deputies arrived at his home. He told them to shoot the dog if needed.

The dog is now being described as a rottweiler-mastiff mix. In the video -- not the textual content of the article -- KHOU speaks with one of the victim's best friends, Lillian Pressly. The story she shares is unfortunately not uncommon: "Oh yeah. He's very dangerous," Pressly said, "especially if he doesn't know you. I can't even come over here. They have to put him up. The other dog is fine, no problem. But him, he has to be put up. So that I can come over and visit," she said.

This senior couple's error in taking in this large, known aggressive dog proved to be fatal.

07/01/13: Woman Killed by Dog
Liberty County, TX - In a developing story, authorities in Liberty County confirm that a dog killed a 63-year old woman today. The sheriff's office received a call from the woman's husband at about 10:30 am, asking that they check on her. The husband was worried because she had called him and said that the stray dog they had been feeding attacked the family's pet dog then attacked her. When deputies arrived at the front gate of the home on CR 6478, the dog confronted them.

One shot was fired at the dog and it briefly fled. The animal returned and deputies shot at it again, hitting it at least once. The dog then fled the property entirely. When deputies checked inside the home, they found Linda Oliver lying on the floor in the living room. She was deceased at that time, covered in dog bites, and had lost a large amount of blood. The stray dog the couple had been feeding for two weeks is described as large, long-haired and black with a white spot on its chest.

The animal continues to be on the loose; authorities are patrolling the area to find the dog.