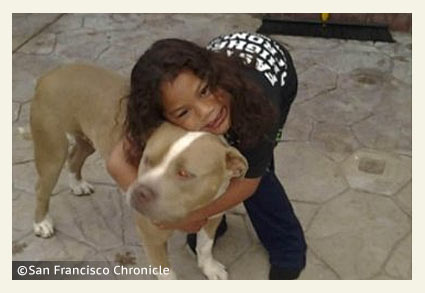 Nephi Selu pictured with Kava, the family pit bull that killed the child.

Mother Speaks Out
UPDATE 06/20/13: The 2-year old male pit bull named Kava that killed a 6-year old boy was euthanized on Tuesday. On Wednesday, the dog owner was identified as Kelala Keanaaina, a San Mateo police officer, and the boy's uncle. Now the boy's mother is speaking out for the first time. Tilema Selu said Nephi was her only child. She said that Nephi was very close to the dog, which is why this comes as a shock. She described it as "one best friend turning on the other."

"All of this is definitely a shock because it's almost like two best friends that turned on... like one best friend turned on the other," she said.

Selu added, "we felt confident that it was a protector of our children," showing that she entrusted the false Nanny Dog myth. During Dog Bite Prevention Week this year, even Donna Reynolds of Bad Rap admitted the Nanny Dog myth was fabricated. Reynolds may have made the admission because pit bulls continue to maul and kill children at an escalating pace. Unfortunately, once a myth gets rooted, it's difficult to stamp out, resulting in more dead children like Selu's son.

Kelala Keanaaina acquired the dog two years ago. According to SFGate.com, the dog was not neutered. The boy's uncle bought into the Nanny Dog myth too. Keanaaina said, "We brought the dog into our home as a pet to help protect life [Nanny Dog myth] and to help watch over [Beware of Dog sign], and by no means did we know that he was going to take life." [Pit bulls kill more human beings than all dog breeds combined.] - Bracketed, italic text added by DogsBite.org.

The ABC 7 article also said that at the time of the attack, Nephi was playing with his young cousins in the backyard. It was his cousins who said the boy had been "riding the dog like a horse" when it suddenly threw the boy to the ground and latched onto his head. One tried to pull the dog's stomach to get it off the boy and another grabbed his leash, trying to yank it away. When his uncle was alerted, he came outside and shoved his hand into the dog's mouth and the dog released.

Back at the SFGate article by Henry Lee that continues to be updated, we learned that attorney Harry Stern was also present at the boy's home on Tuesday with Michael Rains. Both work for a law firm that represents police officers in the Bay Area. Stern described the boy's injuries as needing "a couple of stitches," -- everybody, according to Stern, assumed he would be fine "after a couple of stitches." Stern said it was an "unfortunate tragedy" and the breed was irrelevant.


06/19/13: Relationship Clarifications
New information provides additional clarification on family members living in the home. The attack happened at the boy's grandparents' Union City home. The owner of the dog was the boy's uncle -- still the unnamed San Mateo police officer. The officer's wife and the boy's aunt, Iona Keanaaina, both also live at the Union City home. Defense attorney Michael Rains, now being called the family spokesman, said that Nephi Selu's mother lived at the residence as well.

A variety of "may" or "was" statements regarding whether the boy did or did not attempt to climb on the dog's back have been confusing in the flood of news articles as well. "May have attempted" is complete speculation and stems from the original statement from police Cmdr. Ben Horner. No evidence has arisen thus far that there was an eyewitness to this alleged behavior. So "was attempting" is hogwash and a horrible device used to blame this 6-year old boy for his own death.

Also included in this Associated Press article (published late Tuesday) is a quote from Keanaaina. She told KGO-TV, "[The male dog] played with kids, very obedient, he was never allowed in the house, stayed right at the door, so we never had any problems with him at all." Furthermore, to eliminate the severity of the head injury that killed this boy, Rains stated that the dog's owner "believed the boy's injuries were not very serious and went to work before learning he had died."1

06/18/13: Defense Attorney Appears
NBC Bay Area reported earlier that the pit bull that fatally attacked a 6-year old boy is owned by a San Mateo police officer. The information came from a relative and high-profile defense attorney Michael Rains,2 who represents police officers throughout the Bay Area. Rains was seen Tuesday walking into the home where Nephi Selu was attacked. The young boy was attacked on Monday at 11:30 am. He died several hours later at Lucile Packard Children's Hospital in Palo Alto.

"I feel like all of this is a dream, like a bad dream," said the boy's aunt, Iona Keanaaina. "I wish I could just wake up."

The wife of the San Mateo police officer, Iona Keanaaina,3 said her family is so upset that they do not care what happens to the pit bull-mix named "Gava." She said that Nephi was an only child who just graduated from kindergarten in Union City. He lived with his extended family -- including her eight children -- at the same home. Keanaaina said her husband has been a police officer for nine years. The family pit bull was impounded and is being held for a 10-day quarantine.

06/18/13: Visiting Grandparents' Home
News about the latest pit bull fatality continues to unfold. Nephi Selu of Dixon was staying at his grandparents' home in Union City when the dog attacked. "According to family members, the boy was actively playing with the dog and may have attempted to climb onto the dog's back," said police Cmdr. Ben Horner. "The dog attacked the boy and bit him on top of his head." The owner said the dog "had never been involved in a biting incident in the past," Horner added.

Nephi lived in Dixon, but had been on an "extended visit" at his grandparents' home, according to police. Neighbors said the boy seemed to be living there and had been attending school in Union City. Arthur Kouns, a neighbor, said the family keeps two pit bull-mix dogs in the backyard. He said the dogs have not been a problem in the past and he only heard the animals barking "once in a blue moon." A Beware of Dog sign, however, is posted on the fence of the grandparents' home.

06/18/13: Boy Killed by Dog
Union City, CA - In a developing story, a 6-year old boy was killed by a dog on Monday. The attack happened at a home on Elizabeth Way about 11:00 am. A neighbor said the boy lived with his grandparents at the home along with several of his cousins. The fire department confirmed to ABC 7 News that the attacking dog was a pit bull or pit bull-mix. Neighbors told the news station that two pit bulls lived at the home. At least one of the dogs was taken away by animal control.

The SFGate reported that the boy died at Lucile Packard Children's Hospital in Palo Alto. The boy has been identified as Nephi Selu. Police are expected to provide more information on Tuesday. The boy's death is not the first in the Bay Area to be attributed to a family pit bull. In 2011, Darla Napora, 32-years old, was killed by her pet pit bull in Pacifica. She was pregnant at the time. In 2010, Jacob Bisbee, 2-years old, was killed by three pit bulls at a relative's home in Concord.

View the DogsBite.org Google Map: California Fatal Pit Bull Maulings.
1Such a nice touch Rains!
2Raines is painful to listen to "[The attack] is almost inexplicable" and "the dog was not vicious" even though it latched onto a boy's head killing him. It is his job, however, to defend the police officer dog owner.
3In the video the aunt said, "This is the first time they ever took a dog in." Her police officer husband was clearly aware of the miserable safety record of this breed. Why not our first dog be a pit bull (in a house with eight kids)?