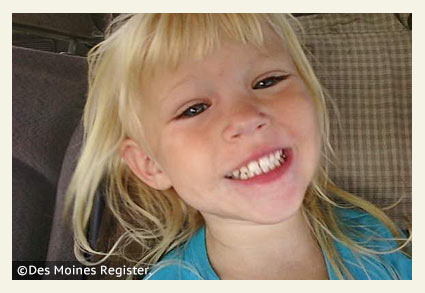 Trial Reset Again
UPDATE 08/26/14: For the second time, the criminal trial date for Jena Marie Wright, 26-years old, has been reset. Wright is charged with child endangerment causing death and neglect after her pit bull viciously attacked a little girl who was under her care. Jordyn Arndt, 4-years old, was airlifted to a hospital, but did not survive her injuries. She died on April 23, 2013. Court documents show that Wright's trial is expected to last five days. The trial was moved to December 8, 2014.

"Wright could potentially see up to 25 years in prison if convicted of child endangerment resulting in death, a Class B felony, and up to 10 years for a conviction of neglect or abandonment, a Class C felony.

The 26-year-old is also facing charges of assault on a peace officer causing bodily injury and interference with official acts in this case. Wright allegedly kicked the arresting officer — former Prairie City Police Chief Louis Modlin — in the chest during a struggle at 601 S. Norris St. in Prairie City." - The Newton Daily News

04/24/13: Parts of 911 Call Released
The Des Moines Register created a video of the 911 call; the news organization removed parts of the call. Gasping and sobbing between words, Jena Wright said, "My dog attacked the girl I was babysitting. I don't think --" Wright stayed on the phone for about 3 minutes, during which medics arrived. "She's not breathing. She has blood everywhere," Wright said. "My dog got her by the neck. Oh my God. I need an ambulance." Jordyn Arndt, 4-years old, did not survive her injuries.

"I'm trying to remain calm," Wright said on the call. "This has never happened before. I don't know what happened. Oh my God." - Jena Wright

On Monday, Jordyn was attacked by Wright's dog, a large pit bull named Brutus, in the backyard of Wright's Prairie City home. Wright, 24, was charged Tuesday with two felonies, child endangerment causing death and neglect or abandonment of a dependent person, along with several misdemeanors, including assault on a peace officer causing bodily injury. Combined, the felonies are punishable by up to 35 years in prison. Wright remains in the Jasper County Jail.

04/24/13: Previous Arrest of Babysitter
The Newton Daily News reports that Jena Marie Wright faces additional charges of interference with official acts and assault on a peace officer causing bodily injury; both charges are aggravated misdemeanors. Court documents also detail the felony charges pertaining to neglect or abandonment: "The defendant knowingly acts in a manner that created a substantial risk to the child’s physical safety by leaving her unattended with a large American Staffordshire dog."

The Daily News also reports that Wright, her husband Harmon Wright III and his father, Harmon Wesley Wright Jr., were arrested about a year ago on felony charges in connection with a marijuana growing operation. Wright was charged with neglect or abandonment of a child, possession of a controlled substance and three counts of failure to affix a drug tax stamp. The controlled substances were accessible to her 2-year old child who was removed from the home.

04/23/13: Babysitter Arrested
Prairie City, IA - On Monday, a 4-year old girl was attacked by a pit bull while under the care of her babysitter. Jordyn Arndt was airlifted to a hospital in Des Moines, but did not survive her injuries. On Tuesday, Prairie City Police arrested babysitter Jena Marie Wright, 24, of Prairie City in connection to the incident. Wright was charged with child endangerment resulting in death, and neglect or abandonment of dependent person. Wright was booked into the Jasper County Jail.

Buster Wright, who lives in the house where the girl was bitten, said the dog involved in the attack is an "American Staffordshire."

1We strongly recommend that jurisdictions also include the American bulldog is this definition.