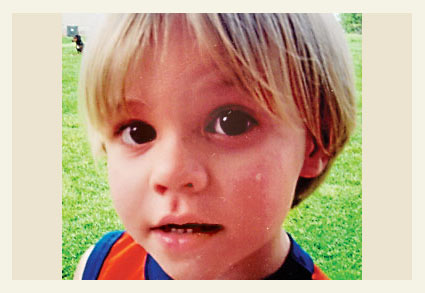 Dogs Euthanized
UPDATE 06/27/12: In a disturbing update about the death of 2-year Jack Redin, killed by two dogs on a property adjacent to his home, NewsandSentinal.com reports that the Sweeney brothers, David and Daniel, are the sons of Third Judicial Circuit Court Judge Timothy Sweeney. Daniel Sweeney is allegedly the owner of the two dogs, but his brother David Sweeney installed an underground invisible fence around his property so that he could care for his brother's dogs.

The article also points out that the Pleasants County Sheriff's Office cannot confirm the breeds of the dogs, as apparently they have not asked the local veterinarian who had been keeping them in quarantine. The typical mislabels for pit bull-mix dogs were offered up by the sheriff's office: lab-mix and boxer-mix. Both dogs were put down over the weekend. An autopsy report on the child's death has not been released. No charges have been filed nor are any expected.

06/16/12: Community Mourns Loss of Child
On Friday, MetroNews published an update about the fatal dog mauling of 2-year old Jack Redin. Sheriff's Deputy Steve McFarland said that Jack and three other children had been playing in the family's yard that day. Jack had been riding around on a battery-powered four wheeler when he wandered away from the group into the neighbor's yard. When family members realized he was missing, they began to search adjacent properties with the help of neighbors.

No one actually saw the attack, but witnesses did see the boy's father find his son's lifeless body. The two dogs did not belong to the property owner David Sweeney; the animals belonged to his brother Daniel Sweeney. An invisible fence was dug beneath the ground to keep the dogs contained. It's unknown how long David had been caring for the dogs.1 David was not home at the time of the attack. Funeral services for the boy took place Saturday afternoon in Parkersburg.

06/14/12: Child Identified in Fatal Mauling
Pleasants County Sheriff's officials have confirmed that 2-year old Jack Redin was killed Wednesday after he wandered into a neighbor's yard and was attacked by two pit bull-mix dogs. The dogs had been confined by an "electric fence" buried beneath the ground, but acted as no barrier to a child coming onto the property. The dogs have been removed from the home and quarantined pending legal proceedings. The name of the dogs' owner has not been released.

06/13/12: Child Killed by Neighbor's Dogs
St. Marys, WV - In a developing story, a 2-year old boy was attacked and killed by two dogs after he walked into his neighbor's yard while playing. West Virginia State Police and Pleasants County Sheriff's Office responded to the scene around 1 pm after the boy's father made an emergency call. The dogs were described as "mixed-breed." The boy's father discovered him in the yard behind the neighbor's residence, according to police. More details are expected Thursday.

1The dogs have also been called mixed-breed and boxer-mix -- common names used to describe pit bull-mix dogs. It is very likely the dogs are pit bull-boxer mixes, as the cross of the two breeds is not unusual.