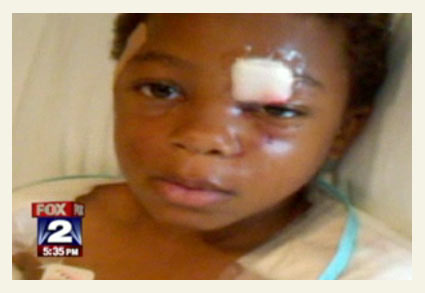 Felony Charge
UPDATE 08/25/10:Two weeks after a near fatal pit bull mauling, Khalil Rocks still cannot walk. His mother Deanna Rocks, however, is pleased that authorities are charging the pit bull owner with a felony. "He's scarred for life," Rocks said. "Some type of punishment needs to be dealt with." On August 26, Jenny Angel, 31, was arraigned on one count of harboring a dangerous animal causing serious injury -- a 4-year felony. She pleaded not guilty and her bond was set at $5,000.

08/13/10: Mother Makes Passionate Plea
Warren, MI - An 8-year old boy is in intensive care at St. Johns after suffering near fatal injuries by a pit bull. Khalil Rocks, who wants to be a scientist when he grows up, was also mauled by a pit bull when he was 3-years old.1 Detective Kevin Borycz, who has investigated dog maulings in the past, said that this is the worst attack he has ever seen. "When you've seen pictures of the injuries -- the arm, the leg, the shoulder -- just chunks of the boy are missing," Borycz said.

The pit bull, named Zeus, broke free from its chain and attacked children that were playing nearby. One child was able to jump a fence, but Khalil stumbled in his flip flops and was subjected to the powerful jaws of Zeus. His mother, Deanna Rocks, makes an emotional and passionate plea in the Fox 2 News video. "Just keep control of these dogs," she said. "There are too many kids getting hurt. Not just hurt, they're dying because of dogs. Get these dogs, keep them off the street."2

"What are the odds of my baby getting bit twice?" Rocks asked.

The Detroit area has long been known as the "dogfighting capital" of the U.S., an area rich with the breeding and ownership of pit bulls with explosive aggression. It's no surprise that many Detroit suburbs have enacted pit bull laws (view related map). Warren, unfortunately, is not one of them. Wayne County, which hosts the City of Detroit, is also the center of U.S. medical research regarding pit bull mauling injuries.3 The shared location of these two activities is not by chance.

The odds of Khalil being severely mauled by a pit bull twice by the age of 8 are indeed slim, but the location of both incidents (the Detroit area) may have substantially increased these odds.

Khalil Rocks Medical Fund
Donations can be made at any BestBank location under the name "Khalil Rocks" to help pay the child's medical expenses.

1The first attack required skin grafting on both of the child's legs.
2The dog owner did not knowingly let her pit bull run free. The animal snapped its chain to attack. According to the 1987 Lockwood & Rindy survey (Are 'Pit Bulls' Different? An Analysis of the Pit Bull Terrier Controversy), pit bulls are 14 times more likely than any other dog breed to break constraint to attack.
3Pitbull Mauling Deaths in Detroit and A Ten-Year, Two-Institution Review of Pediatric Dog Attacks.