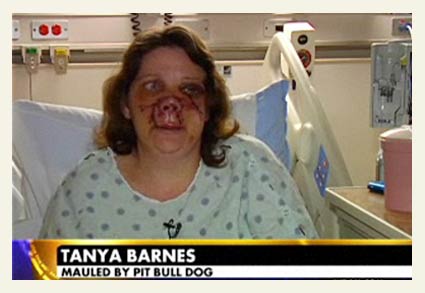 Victim Signs Release
UPDATE 04/27/10: In what can only be described as "deplorable" victim exploitation, Tanya Barnes signed a release Tuesday allowing both pit bulls to be returned to their owner. Earlier in April, Barnes was violently bitten in the face by a female pit bull after a male pit bull stepped on a puppy causing it to bark. Instead of attacking the male dog, the female clamped onto Barnes' face causing life-altering injury and the likelihood that Barnes will be forced into bankruptcy.

"This is not okay," she said referring to her injuries. "Somebody needs to be responsible for this."

Barnes has had two surgeries so far and will likely need several more. Barnes could not afford the COBRA insurance co-payments after the death of her husband. She currently has no insurance. She does not know how she and her children will get through this. "I want my kids to go to school. I want them to have a future. We don't have money socked back in an account somewhere. This is taking our light bill money to get prescriptions filled when we get out of here."

1In September 2011, we discovered that WLOX had removed the original video. We could only find one other replacement, a video from dog bite victim advocate Zupf, who had to alter the imagery so that the pit bull community could not flag the video as "too extreme" under YouTube's "family fun" guidelines.
2Though very conscious and courageous, we believe Barnes is still in shock. The violent attack occurred just a few days ago. The true jolt of the incident and its long-term repercussions is yet to come. While the male pit bull may have saved her life, it was the same dog that stepped on the puppy causing the attack.
Tweet
Share193
Tweet
Share193
Donate Now