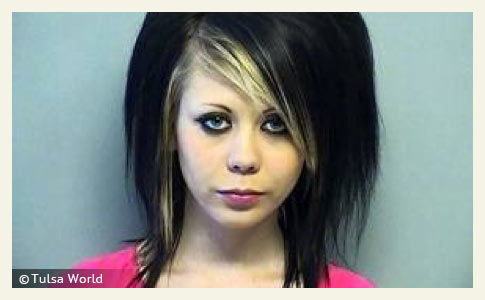 Manslaughter Charges archived
UPDATE 11/04/08: Linzy Earles, who turned 18-years old last month, has been charged with second-degree manslaughter in a juvenile court in connection with the mauling death of her baby, 2-month old Zane Alen Earles. The Tulsa police affidavit states that Zane "was left unattended in an infant swing on the opposite side of the house for approximately two hours." In this time, the family's 8-week old lab-mix,  "that was left loose in the house ate the two-month-old victim."

Fransein’s order states that Earles was previously adjudicated as a delinquent child. A police affidavit states that Earles “has had a history of drug abuse and she was just taken off probation on June 2” in a drug-related matter.
Second-degree manslaughter involves an accusation of “culpable negligence” — an omission to do something that a reasonably careful person would do or failure to use ordinary care and caution.
“We feel that if not for her culpable negligence, it would have been prevented,” Cain said. - Bill Braun, Tulsa World, November 4, 2008

08/05/08: Neglect Charges Filed
A police affidavit alleges child neglect by the 17-year-old mother whose 2-month old son was mauled to death by a family pet. Tulsa Police allege that Linzy Earles has a history of drug abuse and was neglectful when her baby, Zane Earles, was killed by a dog at the home of his mother and grandparents on July 28. Police responded to a call about a dog mauling at the home. When officers arrived, they found the baby had been left unattended in a baby swing for about two hours.

Investigators have been granted a warrant to test the mother's hair and take a blood sample to determine whether she was under the influence of alcohol or narcotics at the time of her son's death, and to possibly explain why "she was unable to wake up to hear her baby's screams prior to her baby's death,” according to an affidavit.
Police plan to conduct a decibel sound test in the home to find out whether any screams from the infant should have been heard when he was being attacked by the puppy, the affidavit states. Tests will be conducted inside the house to find any possible body fluids left at the scene by the puppy "tracked through the residence after eating the victim."- Johnny Johnson, The Oklahoman, August 6, 2008

07/30/08: Mother Only 17-Years Old
Authorities identified the 2-month old baby as Zane Alen Earles. Police have not released the names of his parents or his grandparents. Tulsa police spokesman Leland Ashley said the dog was taken to an animal shelter after the attack and euthanized. Ashley said the mother found her son dead in an infant swing about 10:30 am Monday. The child's body was taken to the state medical examiner's office, where the cause of death is pending, said Randy Saffell, a spokesman for the office.

Ashley declined to release the parents' names, but said the infant's father is 18 and the mother is 17.
Authorities think Earles was bitten numerous times by the black Labrador puppy. - Sheila Stogsdill, The Oklahoman, July 30, 2008

07/28/08: Baby Killed by Family Dog
Tulsa, OK - In a developing story, it appears another family dog has attacked and killed an infant. In this instance, the victim was a 2-month-old baby in Tulsa, Oklahoma. Police said the infant was mauled to death by a young Labrador this morning. The child died at the scene. Officer Jason Willingham says the baby's mother and grandmother were home at the time, but nobody was in the room when the attack occurred. He says the child was left in a swing.