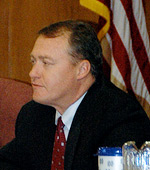 When I agreed to serve as a member of Lakewood City Council, I vowed to strive to do the right thing for our residents, not necessarily the popular thing. Since introducing legislation to ban those dogs know as “pit bulls” from Lakewood, all members of Council have been deluged with e-mails arguing against such a ban, mostly from out-of-towners. Sadly, the pit bull ban is receiving an inordinate amount of public attention, even though it is but a small part of the broader effort by the Mayor and Council to make Lakewood a safer place to live. We should be focusing on the recent decision to add four new full-time and ten part-time police officers, but we are instead flooded with advice from out-of-state special interest groups about dogs.

In the past few weeks, I’ve personally been called a “hysterical demagogue” by out-of-town blogger Charles Brettell and have been labeled a “canine racist” by pit bull enthusiasts. Let’s get this straight: dogs are dogs and people are people. It is absurd to say that a pit bull ban is a form of racism. To compare human racial minorities to a breed of dogs is an insult and a trivialization of the very real issue of human racism.

Pit bull rescue groups are pledged to the protect pit bulls, so it is understandable that they do not like our proposed law. But members of Council have vowed to protect the people of Lakewood. Pit Bull Rescue Central argues that I have taken language out of context from their Web site. Yet, I quoted full sentences and whole paragraphs. The fact is that even pit bull supporters cannot deny that these dogs are different, as a result of very specific breeding practices. Here is further material from Pit Bull Rescue Central:

"It is unfortunate that one of the original purposes of the APBT [American Pit Bull Terrier] was (and still is) dog-to-dog combat, but it's a fact that can't be denied or ignored. It's important that every potential pit bull owner understand the selective breeding process that took place to make the dogs of today. …The American Pit Bull Terrier has been ‘selectively’ bred for hundreds of years to fight other dogs. This is the sad ‘work’ these dogs were created for. In the same way that Labradors were bred to retrieve birds, APBTs were bred to face other dogs in mortal combat. Even in dogs that are not recently bred from fighting lines, the urge to fight can arise at any time. Not to strongly emphasize this fact would be negligent….Training may help the owner control his/her dog, but it will not eliminate the risk for fights. In the case of a fighting breed, the urge to fight is often the result of genetic heritage. Remember that there is no magic cure to remove an inherited behavior selectively bred into a dog." (from PBRC.net)

Thus, it is clear that pit bulls ARE very different from other dogs. Some pit bull enthusiasts point to studies allegedly showing that golden retrievers and even poodles have a worse “temperament” than pit bulls. But the fact remains that, between 1982 and 2006, poodles killed no humans, while one person was strangled when a golden retriever accidentally tugged on a scarf, but pit bulls accounted for at least 110 deaths.

For the above reasons and for safety of our residents, I remain in support of the proposed “pit bull” ban.