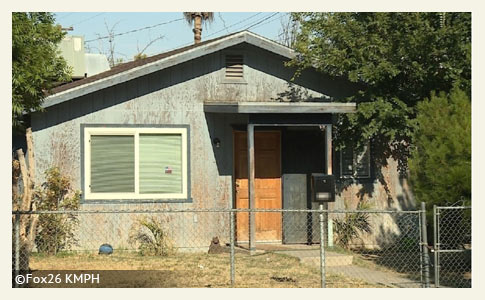 A 3-day old baby was killed by dogs, a mix of Shar-pei and pit bull, at this home.

New Details Released
UPDATE 06/29/16: More details have been released about Susie Kirby, a 3-day old baby girl that was attacked and killed by her uncle's dogs. Prior to going to the bathroom, the mother placed Susie on a recliner-type couch and placed pillows around her so that she would not fall off, Fresno Police Chief Jerry Dyer said. It was also the mother who propped open the door to let in cooler air, he said. She did not know that one of the dogs with a history of aggression was not tied up.

"While she was in the bathroom, the dog came through the door, grabbed the infant and took that baby outside." - Fresno Police Chief Jerry Dyer

At that point, the baby's uncle came home -- he had run out to the store -- and discovered the dogs attacking the baby. "When she came out the child was gone," Dyer said. "In fact, when she was in the bathroom, she heard her brother outside yelling and screaming because he had come home from the store and found the child outside," Dyer said. Police have turned the case over to Child Protection Services for a complete investigation. However, no charges are anticipated.

Susie marks the third 3-day old baby killed by a family dog this year. In April a pit bull-mix rehomed by the San Diego Humane Society killed 3-day old Sebastian Caban. The young couple was lying in bed with their baby and the dog, when the dog unpredictably lashed out. The couple adopted the male pit bull-mix, named Polo, 5-months earlier, while the mother was still pregnant. It was an unwise decision to adopt this dog and an even worse one to allow it on the bed with a newborn.

In February, 3-day old Aiden Grim was fatally bitten on the head by a family dog in Youngstown, Ohio. A forensic pathologist did not characterize that bite as a "mauling," but rather the dog picked up the baby by the head and its teeth punctured the infant's soft skull causing brain injuries and death. In the case of Susie, this certainly was a mauling. It was a predatory attack by a Shar-pei and pit bull cross with a history of aggression. It also appears that both dogs were involved.

Our heart goes out to the mother. Susie's death, however, was extremely preventable. All three of these baby deaths were. Newborns are entirely defenseless and the most vulnerable of all. All household dogs need to be taken into critical consideration when a baby enters a home. No pit bull-type dogs or other dangerous breeds should be near an infant. In this case, keeping the dogs, one known to be aggressive, "tied up outside" was an unreliable solution that ended in death.

06/27/16: Dogs Kill Newborn
Fresno, CA - Early Monday morning, Fresno Police responded to a call of a dog biting an infant. Up to two dogs attacked the newborn baby at a home on the 3700 block of North Glenn Avenue about 12:30 am. The baby girl was transported to Community Regional Medical Center, where she later died, according to Sgt. Dan Macias. The baby's 33-year old mother had thought her brother's two male dogs were chained up in the backyard when the deadly attack occurred, police said.

A door was left open to allow cooler air to come in. When the mother went to the restroom, one or both dogs came in and killed her baby.

The two dogs are described as a mix of Shar-pei and pit bull and are owned by the baby's 30-year old uncle. Police did not identify the baby's mother or the uncle, who surrendered both dogs to the Central California Society for Prevention of Cruelty to Animals. The mother told police that one of his dogs is aggressive. The two adults and the baby were the only ones in the house, Macias said. Though charges have not been ruled out, Macias believes this was an "unfortunate accident."

In a late evening report by YourCentralValley, family members identified the 3-day old baby girl as Susie Kirby. The news group also spoke to Sgt. Dan Macias, who said it was the uncle who saw the dog attacking the baby. "She was in the bathroom at the time and heard screaming," Macias said. "That's when the 30-year old man, who had come home, saw the dog biting the child." Though only one of the dogs was involved in the fatal attack, both animals will be euthanized. 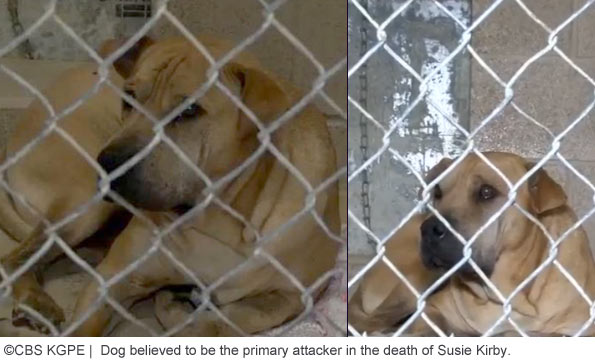