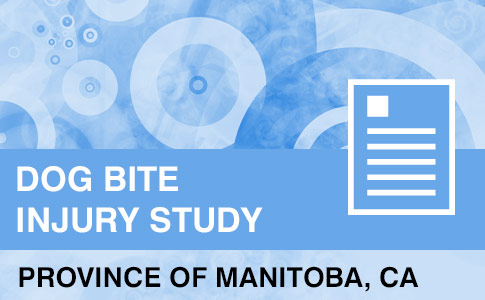 Injury Prevention, June 2012
Canada - Last week, the National Post published an article about a new Canadian dog bite injury study by University of Manitoba-affiliated authors that shows that breed-specific pit bull laws lowered the overall rate at which people were hospitalized with serious dog bite injuries over a 23-year period. The study focuses on the province of Manitoba and jurisdictions within it that banned pit bull-type dogs and jurisdictions that did not from the years 1984 to 2006.

Background: The city of Winnipeg was the first among several jurisdictions in Manitoba, Canada, to introduce breed specific legislation (BSL) by banning pit-bull type dogs in 1990. The objective of the present work was to study the effectiveness of BSL in Manitoba.

Methods: Temporal differences in incidence of dog-bite injury hospitalisations (DBIH) within and across Manitoba jurisdictions with and without BSL were compared. Incidence was calculated as the number of unique cases of DBIH divided by the total person-years at risk and expressed as the number per 100 000 person-years...

Conclusion: BSL may have resulted in a reduction of DBIH in Winnipeg, and appeared more effective in protecting those aged <20 years.

Two key tables within the study illustrate the lowering of hospitalizations for serious dog bite injuries by comparing the pre-implementation and post-implementation period of pit bull bans in Manitoba. For instance, Table 3 depicts all Manitoba jurisdictions combined in the years 1984 to 2006, which showed an -18.1% change in hospitalization incident rate and jurisdictions that implemented BSL sometime during the same years showed a -21.5% change in incident rate.

Lead researcher, Dr. Malathi Raghavan, who also authored Fatal Dog Attacks in Canada, 1990-2007, said that she was surprised by the results and that the pit bull bylaws left her with a "positive impression." If one reviews Dr. Raghavan's fatality study, it is clear that this Manitoba study was a logical next step. The earlier study states that future studies should be designed to "evaluate the effectiveness of dog-bite awareness campaigns and dog-control legislation."

Combination of Three Studies is Compelling

In a subsequent article, Dr. Raghavan defends the Manitoba study by saying that it is a combination of three recent studies showing similar results that provides compelling data: The 2012 Manitoba study; the 2011 Texas study, which showed that pit bulls are associated with higher morbidity rates and higher hospital charges; and the 2010 Catalonia study, which showed a -38% change in hospitalization incident rate after jurisdictions enacted breed-specific laws.

Notably, Canada's most vocal anti-pit bull regulation advocate, Calgary's chief Animal Services officer Bill Bruce, dismissed the Manitoba study and reminded readers that border collies can "grab the role as top attack villain" too.1 After years of preaching pro-pit bull propaganda, however, Mr. Bruce saw a doubling of dog bites in his jurisdiction in 2010 as well as pit bulls biting more than all other dog breeds and overall dog bites in his jurisdiction continuing to rise in 2011.

Supplemental letter: Effectiveness of breed-specific legislation in decreasing dog-bite injury hospitalizations in Manitoba--what it means to researchers, policy-makers and the public, by Raghavan et al., Injury Prevention, September 2012
1According to Dog Attack Deaths and Maimings, U.S. & Canada, September 1982 to December 26, 2011, by Merritt Clifton, editor of Animal People, border collies inflicted one fatal dog attack and two maimings in the 29-year period versus pit bulls, excluding their named mixed-breeds, that inflicted 207 fatalities and 1093 maimings.