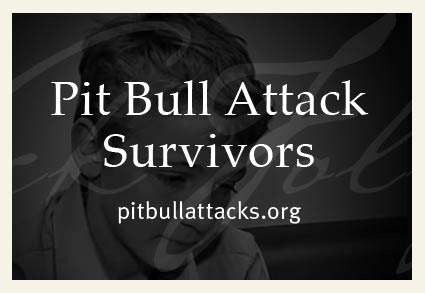 Pitbullattacks.org
DogsBite.org - Last week we launched a new website that over time will share stories of pit bull attack victims who not only survived, but became leaders. The story of Dominic Solesky and his family is part one in a series of five. We encourage readers to view the father's account of the April 28, 2007 mauling. The Solesky family continues to seek civil damages in court. Recently, the Court of Special Appeals of Maryland weighed in favorably on their case.

The Maryland Defense Council reviewed the ruling (See: Circumstantial Evidence of Landlord’s Knowledge of Dangerous Dogs is Enough). The review provides a brief history of the case and explains the high court's recent ruling, which helps clarify the conditions of when a Maryland landlord can be held liable after knowingly leasing a property to a pit bull owner. Unsurprisingly, the claims against the pit bull owner were discharged in bankruptcy.

This appeal to the Court of Special Appeals of Maryland challenged the grant of a motion for judgment in favor of the defendant landlord in a case in which the parents of a young boy sought damages for injuries inflicted by a pit bull owned by the landlord’s tenants. The pit bull escaped from a pen that was located in the backyard of the subject property and seriously injured the 10-year-old boy. The boy’s parents, (“the Soleskys”), filed a Complaint against the dog’s owners and the landlord, seeking money damages in the Circuit Court for Baltimore County.
--snip--

In sum, the Court of Special Appeals held that the Soleskys’ evidence was sufficient to survive a motion for judgment. Accordingly, the court vacated the trial court’s entry of judgment in favor of the landlord, and remanded for further proceedings.