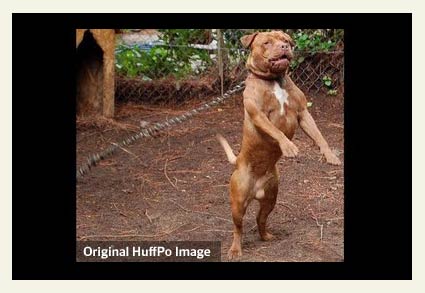 A male, unneutered, chained pit bull -- a recipe for disaster.

Parents and readers of DogsBite.org, we guarantee you that the original image posted by the Pit Bull "PuffPo" of a male, chained pit bull (pictured), is indeed a very dangerous "pet." Few humane organizations and gatherers of fatal dog attack statistics would disagree. The Pit Bull PuffPo succumbed to pressures from pro-pit bull groups and did so OVER the safety of your children.

03/03/10: Huffpo Names Nine Most Dangerous Pets
According to the Huffington Post, there are nine dangerous pets that are too dangerous to own, pit bull terriers being one. The list includes: ostriches, kinkajou, pit bull terriers, constrictor snakes, venomous snakes, tiger (or any other big cat), alligators, crocodiles, and/or caimans and deadly spiders. It seems the only dangerous species left off the list are flesh-eating piranhas, who are known for their sharp teeth and a voracious appetite for meat.