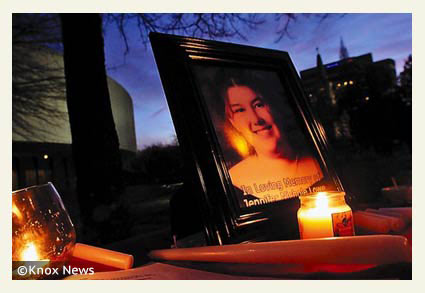 A candlelight vigil held for Jennifer on her 22nd Birthday.

The Death of Jennifer Lowe
DogsBite.org - From time-to-time we publish a "blame the victim" comment to show our readers how shameful they are. On March 10, 2010, an anonymous commenter left the following message about the fatal pit bull mauling of Jennifer Lowe. During this lengthily and horrific attack, Jennifer fought back both pit bulls as they tore away her face, neck, shoulder and arms. She died shortly after reaching the hospital. She did not lose consciousness until her death.1

"FYI, Jennifer Lowe knew those dogs had been deemed aggressive and CHOSE TO LIVE IN THAT TRAILER WITH THE DOGS. They were breeding them and bragging to customers that the dogs had "attacked a cop car." The dogs had never bitten anyone, they had never attacked or killed anyone's livestock or pets.2 So it's not like they were out biting people and the authorities weren't doing anything about it. They were only deemed aggressive b/c a police car was involved. Jennifer Lowe's death, although tragic, is no one's fault but hers, her boyfriend, her boyfriend's family who also lived there and bred the dogs."

DogsBite.org forwarded this comment to Kenneth Phillips, who represents the Lowe family. Phillips recently said that the family received an undisclosed settlement from Knox County. Phillips successfully obtained this settlement since officials knew the dogs that killed her were dangerous. According to WATE.com, in the year leading up to Jennifer's death, animal control had deemed both pit bulls "dangerous" and had visited the dog owner's home five times.3

"The police had been charged by the dogs and had shot at them one year prior to Jennifer's death, well prior to her being at the mobile home where they eventually killed her. I have that police report. Additionally, the police had regarded the dogs as being vicious because the dogs were doing things like attacking a police car, near a school bus stop and a church, making the presence of the dogs a serious threat. I have the incident on video, I have the police on video advising the animal control officer that the dogs were vicious, and I have on video the reaction of the animal control officer, which was less than satisfactory, to put it mildly. More to the point, Jennifer was not present at any of those times (or she would have been on the videos), so one cannot say that she knew anything about what had happened. Additionally, the County of Knox would have produced such evidence if any existed, but none was produced in the litigation. Whoever wrote this post is relying upon hearsay, not facts. Based on what we know, Jennifer was not responsible in any way for what happened to her. Additionally, her death was so horrifyingly violent and inflicted over such a long period of time, that nobody could ever say that it was her "fault" to have died in that way."

DogsBite.org no longer accepts anonymous comments. Readers must now have a Google, Blogger, WordPress, TypePad, LiveJournal or AIM account.
1This same horrible truth, of the victim being "conscious" during every bite, the ripping and tearing of skin, ligaments and muscles and the crunching of bones, was also spoken by the families of Cheryl Harper and Lowell Edison. Victims of violent dog attacks do not "pass out" readers, they vividly experience each moment of the attack.
2Media reports show that the pit bulls owned by Charles Smallwood had indeed attacked a neighborhood dog prior to the attack on Jennifer.
3Pit bulls in fatal mauling considered 'dangerous,' animal control says, WATE.com, November 13, 2007 (www.wate.com)