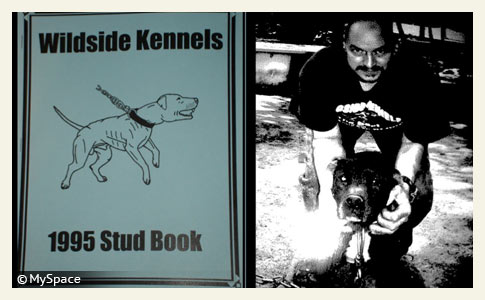 UPDATE 12/23/08: The Wildside Kennel MySpace page is now gone from Google cache. It has been preserved as a DogsBite.org Scribd page. Pet-Abuse.com has Ed Faron's 1989 conviction recorded online, and we imagine shortly, will also have his 2008 arrest record and related details.

12/12/08: Breeder Denies Involvement
Millers Creek, NC - Just one glance at Ed Faron's MySpace page -- which only remains in Google cache now -- and you'll have a good idea of the types of dogs he breeds and for the purpose in which he breeds. This is topped off with a voice over at the web page that promotes "stopping BSL." One can even purchase a dogfighting painting signed by Ed Faron. The image depicts a "handler" drying off a pit bull moments prior to a match. You can meet Ed in this video.

Charged with Felony Dogfighting and Baiting

Faron has been charged with felony dogfighting and baiting. The Wilkes Journal-Patriot reports that Faron said he was a victim of entrapment, referring to two men who came to his house and said they wanted to buy pit bulls for dogfighting. Faron, 61, said he now realized the two men were undercover officers. Feeling the economic squeeze, Faron said, "I took the bait and started telling them what I thought they wanted to hear" when they asked for dogs for fighting.

Although he was convicted of dogfighting and sentenced to a year in jail in Alamance County in June 1989, Faron said he didn't engage in that illegal activity now. He also said he didn't knowingly sell dogs for fighting. A website for Wildside Kennels, at renegadewebdesign.net, states, "No dogs bred, raised or sold for illegal purposes!" and lists extensive pedigree information for pit bulls at the kennel. Authorities seized 127 pit bulls from his property.

Faron said he sells pit bull puppies for an average of $500 each. But Wilkes Sheriff Dane Mastin said authorities believe Faron sold dogs for around $1,200 to $7,500 each. Mastin also said that Faron started the Appalachian Pit Bull Club. After the Humane Society of the United States (HSUS) released news of the seizure of the 127 dogs and the charges against Faron, numerous pit bull lovers fired up their blogs and began posting their support of Faron.

The Complete Gamedog: A Guide to Breeding and Raising
the American Pit Bull Terrier by Ed and Chris Faron

Ed and Chris Faron authored a well-known book that is passed between dogfighters and breeders of fighting dogs. So that people can truly understand the violence involved in dogfighting and the dispensability of these dogs -- owners of fighting dogs do not love their dogs -- we are posting excerpts from this book. The quotes are not necessarily from the authors, but rather dogfighters they profiled in the book or others who wrote stories reprinted in the book.

This is how dogfighters talk about their dogs:

"Vindicator was really punishing Zebo's front legs, but Zebo was hurting Vindicator's nose putting holes in his muzzle the size of my little finger, and the blood was running all over." Page 33

"I believe I kept Homer this time and rolled him on a Zebo dog, and he ruined it in about five minutes, took part of it's jaw out." Page 37

"His face had only just healed from that fight with the Wreckers' dog and he got his nose chewed half off again, that night." Page 40

"Everyone told me afterwards that Miss Rufus was a fantastic bitch; she got on the head and rode it for the first ten minutes or so until she wore the other bitch down and then she went in and worked the chest, legs, brisket- everything. She broke both of the bitch's front legs and even reportedly broke several of her ribs. Willie B. told us that the bitch she beat had been the best Red Boy bitch he had ever seen." Page 44
"She had one of the fastest, hardest mouths we'd ever seen, and she snapped one of Miss Rufus' front legs like a twig." Page 45

"Miss Rufus spent most of the rest of the fight on her back and Bandit broke her other front leg high up in the shoulder, as well as one of her back legs, in the knee joint. The only leg she didn't break she chewed all to hell. She had literally scalped Miss Rufus, tearing a big chunk of skin off the top of her head alongside one ear." Page 45

"She was a super-rough dog that hit our bitch hard and laid one of her legs open to the bone as soon as she was released. That was her first and last hold. At nine minutes Jolene had broke her front legs and was working the throat of a down dog." Page 50

"We later found out that she had broken both of her opponent's front legs and literally tore one of them off." Page 53

"Sadie had destroyed her face so badly that her sinuses were crushed, her whole face was pulsing up and down as she breathed and air was bubbling out of the holes on her muzzle and around her eyes. The last thing Jolene did before losing consciousness entirely was throw up an incredible amount of blood- we couldn't figure out how she could have swallowed so much. We carefully pried open her mouth and peered inside with a flashlight, and it was then we saw just how badly she was hurt. There was a big hole between her eyes- big enough on the outside to stick a dime into, and this hole went clear through her skull, emerging in the roof of her mouth just in front of her throat. A thin trickle of blood was running down her throat, she must have been hemorrhaging throughout the fight. We sat there helplessly, watching our pride and joy take one last faltering breath, and then Jolene was gone." Page 54

"It's a shame she had to run into one she couldn't beat, but it would have been wrong to deny Jolene her chance and we believe it was the happiest day of her life." Page 55 referring the fight described in the quote above

"We might as well tell you that we're ‘Dutch Boy' fanatics; considering we had a dog that could break either leg at any time, I mean, he broke muzzles, crushed skulls- we saw him bite dogs in the chest and their chest would literally collapse. That was Beau, and he was a Dutch Boy bred dog." Page 60

"She loved to work the stifle, but she could do it all. I've seen her literally tear a dogs nose off." Page 62

"We saw her punch holes through the chest and lung of a bitch in six minutes, one time; she was a punishing chest dog. Her sister was a brutal leg dog- she would slash them legs up, looked like someone used one of them Ginsu knives!" Page 62

"Boss took a chunk of bone out of that dog's skull the size of a fifty-cent piece!" Page 62

"Sadie hit the front legs immediately, by the 15 minute mark she had both of Star's front legs broken and one of them was completely gone- but Start kept on scratching, we couldn't stop her." Page 78

"His next three rolls were into a bigger dog than him (fifty pounds) and nothing went under forty minutes. In these rolls Roy had his foot broken and tendons in his front legs torn for life. His legs would never be the same." Page 81

"He put the lower half of his jaw around the bottom of Bossman's neck, his upper jaw on the back of his neck and bit!!! There was a ‘crack' and Bossman straightened out and lost control of his bowels- he was stone-cold dead!!! Roy continued to crunch on Bossman's skull." Page 82-32

"Ajex gradually worked his way to the top and at forty-five minutes broke on of Bandit's front legs with a loud snap. The leg dangled uselessly for the rest of the fight." Page 92

"The pup off Bandit (blinded in one eye one back leg broken, and his head, chest both shoulders and both stifles badly damaged) finally quit, coming across and standing parallel with the dog on his last scratch. At this point the ‘dogman' told the kid something to the effect of "see, I told you he was a cur like his father." Page 97

The Reach of Dogfighting

DogsBite.org supports community vitality and the safety of people and pets within their community. Dog fighters and breeders of fighting dogs lie in sharp contrast to this mission. The painful results of dogfighting stretch far beyond the pit and badly injured, if not mutilated dog. The results populate our streets and animal shelters with potentially dangerous pit bulls. For the safety of our communities, we must stamp out this bloodsport once and for all.