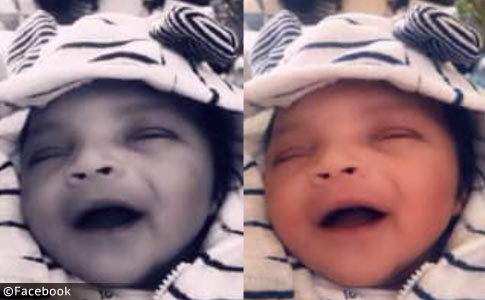 Infant Identified
UPDATE 05/11/21: Police have identified an infant killed by a family dog on Monday as Carter Settles. The baby was being held by a family member when "the dog jumped up on the adult family member and began biting Carter," Norwich police Lt. John Perry said. Hours after the baby's death, police said the boy's father, Timothy Settles, was the last person seen before a fire damaged a New London home. Settles is currently a person of interest in the early morning arson.

Norwich police said the family dog was a male pit bull-mix. "At this time in the investigation, we are unable to determine how long the family had the dog and how old the dog is," Perry said. The infant suffered multiple traumatic injuries. He was pronounced dead at the scene. At the time of the attack, the baby was in the home with his mother and paternal grandmother. His father was not present. Police have not indicated any possible motives behind the New London blaze.

Earlier, we reported that in September 2020, Timothy Settles was charged with multiple crimes while residing on McKinley Avenue. The Day examined those charges today. Settles was arrested in an assault on a pregnant woman living there. The victim told police that Settles had lured her home from work by falsely claiming their apartment was on fire. Settles pleaded guilty to assault and interfering with police. Last night, Settles' son was killed by a dog at the McKinley location.

The report said police responded to a call about a disturbance in the back of Settles’ residence on Sept. 19. The pregnant victim told police that Settles had lured her home from work by falsely claiming their apartment was on fire.

The woman said their argument turned physical, when he began hitting her on the head and scratching her neck, according to the report. Police identified bruising to the woman’s forehead and a laceration to the back of her neck.

Police said Settles resisted when officers tried to put him in handcuffs. It took three officers to handcuff his hands in front of his body, as he was on the ground on his back, the report said. He was unable to be processed due to his "irate behavior" and was placed in a holding cell at Norwich Police Department. He was read his rights, fingerprinted and photographed the next day. - The Day, May 11, 2021

Settles no longer resides at the apartment on McKinley Avenue. It has not been established if Settles had connections to the property on Rosemary Street, where he was seen just before a fire broke out at 4:00 am Tuesday morning. Settles remains at large following the New London fire. New London officials still have not released details about how the fire was started, only that the fire is being investigated as arson and that they are seeking Settles as a person of interest.

05/11/21: Infant Killed by Family Dog
Norwich, CT - A 1-month old baby has died after being attacked by a family dog. Officers were dispatched to a multifamily residence in the 100 block of McKinley Avenue about 8:40 pm for a report of a dog attack. Arriving officers found the newborn baby injured by the dog. The infant was pronounced dead at the scene. Police described the dog as a pit bull-mix. Police have been providing support and counseling to the family and the officers who responded to the scene.

Last year, a number of infants were killed by family dogs. Eight infants, ages 4 weeks to 7 months old, died after being attacked by a dog. Family pit bulls were responsible for half of these deaths. Three breeds were responsible for 3 deaths, American bulldog-mix (1), Belgian malinois (1) and German shepherd-mix (1), and one death that occurred in military housing did not release breed data. One parent was criminally charged and pleaded guilty to one count of felony neglect.

No fatal dog attacks have been reported in the state of Connecticut since 2019, when a rescue pit bull belonging to Annie Hornish, the Connecticut senior state director of the Human Society of the United States, killed a 95-year old woman by inflicting a Level 6 bite. After the attack, Hornish falsely claimed the elderly victim, Janet D'Aleo, had died due to "falling." In January 2021, the estate of D'Aleo reached a $2 million dollar settlement against Hornish and her husband.

Fox 61 reports that a fire at a New London home Tuesday morning that sent one person to the hospital with injuries may be linked to the newborn's mauling death. New London Fire responded to a 2-alarm fire on Rosemary Street at about 4:00 am Tuesday. A woman was transported to the hospital with non-life-threatening injuries. New London police say they are looking for 32-year old Timothy Settles as a person of interest to be questioned with respect to the arson investigation.

Settles is the father of the infant who was killed by the dog, according to New London Police Chief Peter Reichard. WFSB is is at the scene of the New London house fire. The fire was started on the front porch. Persons living on the first floor were not home at the time. All persons living upstairs were able to exit the home. Fire "opened up the roof" of the home to put out the fire. Settles was the last person seen at the home before the fire was started. No warrants have been issued.

According to The Day, Timothy Settles, 32, of 36 McKinley Avenue, Norwich was charged with disorderly conduct, third degree assault and interfering with police back in September 2020. 36 McKinley Avenue is the location of the fatal dog mauling Monday night. On Tuesday, a dog trained in detecting accelerants was called to the scene of the arson. The two-story home appears to have suffered significant damage. Multiple windows were blown out and extensive charring was seen.

The Courant provided an update on the dog attack. "We don’t have any information to let us know why the dog did what he did," Norwich Lt. Anthony Gomes said. "It was reported to be without warning." Two adults witnessed the attack, he said. It wasn’t clear if Settles was one of them. "Unfortunately, because of the nature of the incident we haven’t been able to talk to the mother. She is distraught," Gomes said Tuesday. Meanwhile, New London police are looking for Settles. 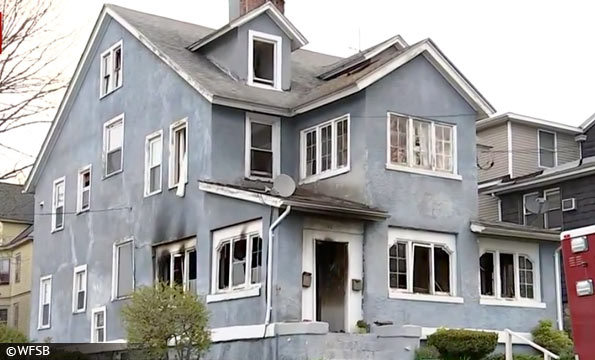 An arson at a New London home maybe connected to a dog attack that killed an infant boy. 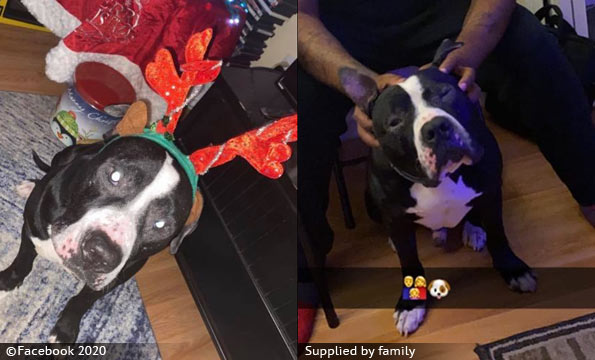 A black pit bull seen on the mother's Facebook page -- a neighbor said the pit bull was black.

Baseline reporting requirements:
Law enforcement departments across the United States should release consistent "baseline" information to the media and the public after each fatal dog mauling, including these items.
Tweet
Share224
Tweet
Share224
Donate Now