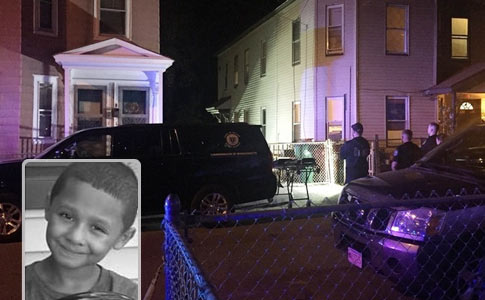 Victim Identified
UPDATE 10/27/17: The 7-year old boy has been identified as Javien Candelario. On October 21, he was brutally killed by two pit bulls housed behind a dilapidated gate between 56 and 58 Clare Street. Witnesses said about 15 people saw the horrific mauling. Two of them included Javien's mother and his older brother. No one knew how to save him from the jaws of the pit bulls. Five police officers that arrived too late to save Javien are also traumatized and undergoing counseling.

Lowell city councilor Rodney Elliott, who recently spoke about the attack on Nightside with Dan Rea, said the details about how the attack started remain sketchy. Javien went to pat the dogs, who were in the fenced yard. "The dogs pulled him over the fence," Elliott said. Earlier, witnesses gave different accounts of how Javien entered the yard. One claimed "he jumped the fence" and another echoed the words Elliot did, "The dog grabbed him and pulled him over the fence."

Elliott sponsored the city's pit bull ordinance that was enacted in 2011. It was nullified one year later after Massachusetts' legislators enacted a state preemption law barring cities and towns from adopting breed-specific laws. “I think if people knew the gruesome details, they might not be as quick to judge the idea of placing more restrictions on owning pit bulls," Elliott said Friday. There will be a funeral mass on Saturday at St. Michaels for Javien. He will be buried in a donated plot.

10/23/17: 15 People Witnessed Attack
New details about the boy's death were revealed over the weekend. Resident David Swiniarski, 22-years old, was one of about 15 people who witnessed the horrific dog mauling. On Saturday night, two pit bulls fatally attacked a 7-year old boy after he entered into a fenced-in area between 56 and 58 Clare Street. When Swiniarski and his roommate heard screaming, the pair ran down the street to a crowd of people standing in front of a driveway blocked by a chain-link gate.

"Two 100, 120-pound pit bulls just getting his neck, his legs ... Everyone was screaming, but no one knew what to do." - David Swiniarski

Neighbors described the pit bulls as large and territorial, one brown and one gray. No photos have been released of the dogs. Some neighbors wondered how the boy could have gotten over the dilapidated 4.5-foot fence. Answer: instantly. Other reports indicate the victim's older brother also witnessed the horrible attack. "The older boy, on the sidewalk, he said, 'I couldn't save my brother,'" recalled a 52-year old female neighbor, who moved in as recently as two weeks ago.

WHDH released parts of the 911 calls. "A child’s being attacked by some sort of animal," the operator told police. "Apparently the dog will not let go of the child." Also confirmed in the calls is that police fired on one of the pit bulls. "Lowell, shots fired, the dog is hit, it’s still coming at me," the officer told the operator. "Lowell, the dog just jumped over the fence," he added. Presumably that means after being shot, the pit bull was still able to scale the fence and continue fleeing.

Monday night, the Lowell Sun cleared up details about this injured, at large pit bull. Despite being shot, the pit bull ventured over a mile away before being killed in a hail of police gunfire. Earlier, we pointed out that an employee at UMass Lowell received a text alert at 6:43 pm about the pit bull attack. At 8:17 pm he received another text stating the dog was found. That is about 1.5 hours. We also noted that another commenter stated in response, "That explains the helicopters."

Finally, there are different accounts about whether the boy jumped the fence or if the dogs pulled him inside. Neighbor Nilda Garcia alleges a group of kids were playing with a ball, when the ball went through the fence. "He jumped the fence and the dog grabbed him and killed him," she said. Neighbor Bill Brettancourt disagreed. "The boy had leaned over the fence like this [gesture]. The dog grabbed him and pulled him over the fence. The boy did not go in there on his own," he said. 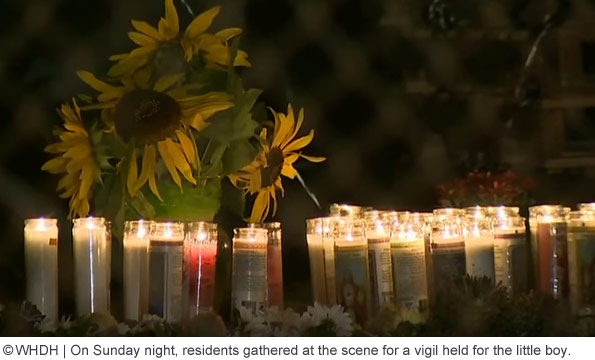 10/22/17: Boy Mauled to Death
Lowell, MA - A 7-year old boy is dead after being mauled to death by two pit bulls in the Acre section of Lowell Saturday evening. A preliminary investigation reveals the unidentified boy entered into a fenced-in area on Clare Street that housed the pit bulls, according to a press release from the Middlesex District Attorney's Office. Crime scene tape and police vehicles were seen outside homes at 56 and 58 Clare Street after the dog attack, reports the Lowell Sun.

Police received a call about the attack about 6 pm. They arrived on scene and discovered the unidentified child deceased. After the attack, one of the pit bulls escaped the fenced-in area. The dog was subsequently located and euthanized. Lowell Animal Control took the other pit bull into custody, according to the release. The investigation remains ongoing by the Middlesex District Attorney's Office, the Lowell Police Department and the Massachusetts State Police.

NBC Boston interviewed Angel Argueta, who lives nearby. "I heard sirens, he said. "Then I heard something that appeared to be gunshots. That's when I came out here. The neighbors told me that two dogs had devoured a kid. I heard the owner came out and was trying to take the dogs off. They wouldn't listen. I asked if the kid was okay. They said, no, he didn't make it." Earlier, Argueta had seen the boy's mother, who he described as "trying to wake up from this nightmare."

CBS Boston was also live on scene after the attack. One neighbor, who witnessed part of the mauling, said he came outside after he heard the boy's mother screaming, "Dogs have my kid! Dogs have my kid!" The lady was hitting the dogs with a stick, he said. "The dogs would not let go of the kid; dragging him around like a ragdoll." A female neighbor, who said she always sees kids playing outside in the neighborhood, described the two pit bulls as "kinda scary and rough."

Local commenters on the WHDH Facebook thread added more details, including one who works at the university. James Donahue wrote, "I go to and work at UMass Lowell. At 6:43 PM we all got text alerts that there was a pit bull attack, then at 8:17 PM that the dog was found and euthanized. This is beyond tragic." Matty Bee wrote, "That explains the helicopters." Obviously, police were very concerned about the at large pit bull and apparently used helicopters to help locate it.

Fatal dog maulings in Massachusetts are very rare. Our 12-year data set from 2005 though 2016 only has one other fatality, the death of 7-year old Conner Lourens in 2006. Back in 2012, humane organizations pushed through a comprehensive animal welfare bill. Deliberately buried in it was a preemption clause prohibiting jurisdictions from adopting or enforcing breed-specific laws. At that time, Lowell, Boston and several other Massachusetts cities lost their pit bull ordinances.

The Lowell pit bull ordinance was based on the City of Boston's 2004 ordinance, the Responsible Pit Bull Ownership ordinance. Lowell's ordinance required all pit bull owners to register their dogs, spay and neuter their dogs, provide proof their landlord, lessor or property owner had knowledge of the dog(s), provide "secure temporary enclosure" when transporting their animals, limited ownership to two per single household, required signage and several other regulatory conditions. 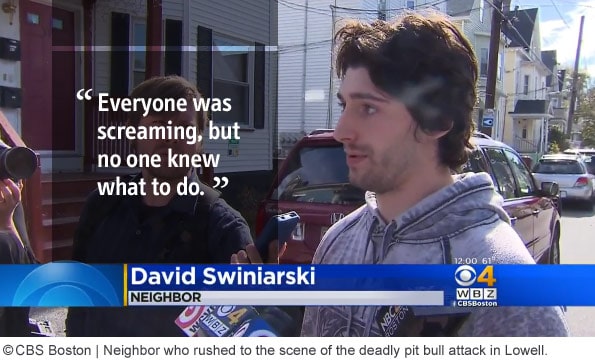 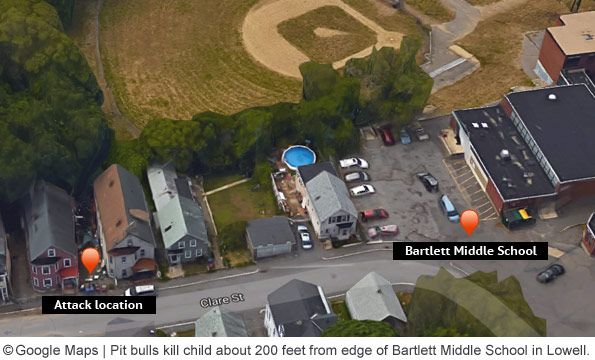