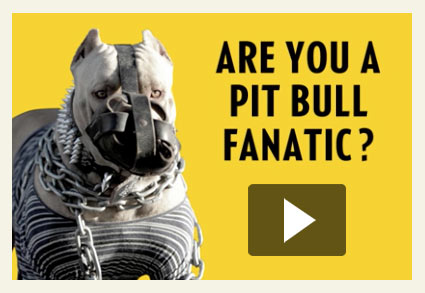 Watch National Post Video
Toronto, Canada - National Post columnist Barbara Kay has really crafted gold in her recent video. Barbara Kay often tackles the pit bull issue in her weekly column. The video is fittingly titled, "How to know you're a pit bull fanatic." Kay then dives into the type of people who respond to her controversial columns about pit bulls. "I get a lot of blow back from pit bull fanatics," she states. "I call them fanatics because they are in denial about the inherent nature of the dog they love."

"They think they can convince me that I am wrong, but logic just isn't their strong suit." - Barbara Kay

Kay next asks, "Are you a pit bull fanatic?" Through a series of examples, she spells out the actions and attitudes that comprise a typical pit bull fanatic and the false myths they propagate. At one point, she states, "You denounce me for 'stereotyping' pit bulls." Then asks, "What is a canine breeding program if it isn't an attempt to produce a stereotype?" Kay even addresses the flawed gun vs. pit bull analogy often used by fanatics, which as Kay shows, are not comparable at all.

3 thoughts on “Video: Columnist Barbara Kay on How to Know You're a Pit Bull 'Fanatic'”